Windsor Man, His Garden Get Splattered with Human Waste Dropped by Airplane

An airplane dropped human waste which fell on a man and his garden in Windsor around mid-July this year. Karen Davies, Councillor Clewer East, described it as a 'really horrible, horrible experience.' 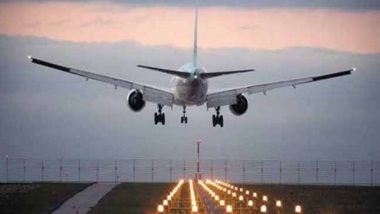 London, October 20: In what is being termed as 'one in a billion chance' and 'unpleasant', a man and his garden were splashed by human waste that was dropped from a plane. Reports inform that the bizarre incident has been reported from Windsor area in England around mid-July. The matter came to foreshore Karen Davies, Councillor Clewer East, told  about the it at the Royal Borough Of Windsor & Maidenhead's aviation forum. She reportedly said that the man was out in the garden when the incident took place and termed it as "really horrible, horrible experience." YUCK! Toronto Citizens Start Pooping and Urinating in Open! Park Puts Up Signboards 'Poop and Scoop' for Humans Instead of Pets.

She said, "I know a number of incidents happen every year with frozen sewage from planes, but this wasn't frozen and his whole garden was splattered in a very unpleasant way,"as reported by the BBC. Councillor Davies added that the man did not seek an insurance claim for the incident. "Obviously he wasn't going to do that for the sake of a couple of garden umbrellas, in terms of bumping up his premium, so he's just sort of had to take it on the chin," he reportedly said. DISGUSTING! Woman Finds Human Poop With Chicken Nuggets in Freezer of Iceland Supermarket, Offered Chocolates as Apology.

Talking about the same, the councillor said that such incident 'hopefully' never happen again any of the residents. Meanwhile, Councillor for Eton & Castle, John Bowden reportedly called that incident as "one in a billion chance." Notably, planes store human waste in special tanks during the flight and it is mostly disposed off on landing.

(The above story first appeared on LatestLY on Oct 20, 2021 05:44 PM IST. For more news and updates on politics, world, sports, entertainment and lifestyle, log on to our website latestly.com).