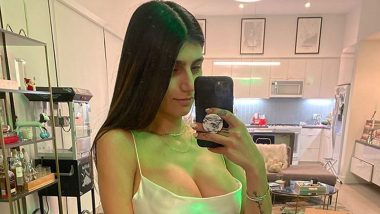 Happy Birthday, Mia Khalifa! The stunning ex-pornstar, sports presenter, XXX OnlyFans star and activist, Khalifa turns 28 today. To mark her birthday, on the next day Mia shared a sexy selfie mentioning that she has officially entered her late 20s now. She shared the selfie with a sad emoji and that feeling is something each one of us in the late 20s can understand. It doesn't feel great getting so close to the 30s but that's life. She recently took to Twitter to voice her opinion about India's Farmer protest. "What in the human rights violations is going on?! They cut the internet around New Delhi?! #FarmersProtest" wrote Mia Khalifa on Twitter with a picture of the protestors holding a placard that reads "Stop Killing Farmers".

Mia had also recently tweeted stating that she is determined not to bow from her stance. Khalifa took to Twitter to share pictures of a protest against her and environmental activist Greta Thunberg. Well as strong an activist she is, Khalifa knows exactly how to slay! For this birthday picture, Mia Khalifa wore a plaid shirt in yellow and blue. Leaving her hair open she is giving away a thirst-trap expression!

Mia Khalifa is a brave soul. She recently gave away some chilling revelations that made all the youngsters on TikTok vouch for #JusticeForMiaKhalifa. She shed lights on how she was tricked and sexually abused in her initial days by a vogue photographer and it is the most infuriating detail, the last straw. But the good news is that a petition demanding justice for Mia Khalifa has already received one million signatures. The petition demands Mia Khalifa's domain name to be returned and her videos to be removed by big enterprises.  Mia Khalifa Reveals Chilling Secrets From The Time Her Famous Hijab Video Went Viral and How She Was Sexually Exploited by 'Vogue Photographer' and Bang Bros.

(The above story first appeared on LatestLY on Feb 11, 2021 05:37 PM IST. For more news and updates on politics, world, sports, entertainment and lifestyle, log on to our website latestly.com).