The skilled artist has added the right beats to the song and made a viral mix that he titled 'The Saandhni Beats.' The mix featured exclusively on the Weekend Ka Vaar episode. 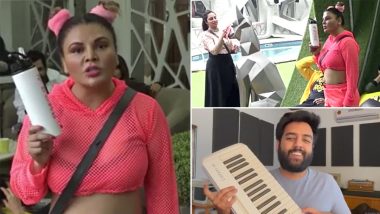 The lockdown became quite bearable with Yashraj Mukhate making groovy renditions of anything and everything. He gained popularity with his hilarious mix that he made out of Kokila Ben and Rashi's dialogues from Saath Nibhana Sathiyaa. He then went to make a sensational rendition of an Emotional Attyachar episode and had everyone dancing to his mix 'Biggini Shoot'. He then made Shehnaaz Gill more popular than she already was when he made the mix 'Tuada Kutta Tommy'. Shehnaaz Gill’s Response to Yash Mukhate’s ‘Tuada Kutta Tommy’ Proves That She Is a True Blue Punjabi.

Now, Mukhate has found his new muse and it is none other than Bigg Boss 14's Rakhi Sawant. In one of the latest episodes, we saw Rakhi getting upset about someone throwing her bottle in the swimming pool. She asks Bigg Bogg to find the culprit and calls out Arshi Khan to be the one who might have pulled of this prank. She calls her different names and this exact moment was Yash's inspiration for a new mix.

The skilled artist has added the right beats to the song and made a viral mix that he titled 'The Saandhni Beats'. The mix featured exclusively on the Weekend Ka Vaar episode where the housemates along with Salman Khan enjoyed the song. Colors' official handle also shared the video of the same which has garnered 9 million views already.

On a more serious note, last week Rakhi was seen breaking down upon finding that her mother was in the hospital and hence, could not personally come to visit her for the family week. Rakhi's brother Rakesh revealed that their mother has a tumour in her abdomen and will be undergoing a major surgery soon. He also hailed his sister for being an entertainer and also for not losing her calm upon hearing of their mother's health. Bigg Boss 14 Challenger Rakhi Sawant Reveals Her Game Plan for Salman Khan’s Reality Show.

Talking about Yashraj, he shot to fame when his Rasode Mein Kaun Tha video turned into a rage on social media. The video got so popular that the makers of Saath Nibhana Sathiyaa returned with the second season of the show. His video got Shehnaaz Gill's attention also as she dropped a comment on his "Tuada Kutta Tommy' video. We wonder who will be his next muse!

(The above story first appeared on LatestLY on Jan 12, 2021 01:29 PM IST. For more news and updates on politics, world, sports, entertainment and lifestyle, log on to our website latestly.com).