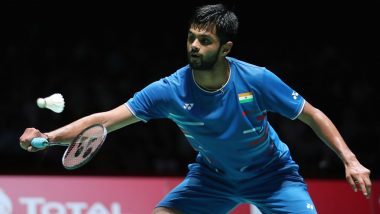 Basel, August 24: Sai Praneeth's dream run at the 2019 BWF World Championships came to an end on Saturday with a 13-21, 8-21 loss to Japanese World No.1 Kento Momota. Praneeth kept pace with the defending champion for much of the first game, but Momota switched gears in the second and left the 27-year-old Indian reeling. There was little to seperate the two before the interval of the first game. Praneeth fluctuated between defence and attack and hardly made an unforced error which meant that Momota was holding a slendor lead of 11-10 in the first game. PV Sindhu Beat China's Chen Yu Fei to Enter BWF World Championships 2019 Final.

Momota started to assert himself after that and Praneeth started making a succession of unforced errors. Praneeth could only take two more points after resumption as Momota took the first game 21-13.

Praneeth was completely out of his depth in the second game with Momota relentlessly ticking away the points. The Indian started making a number of errors and by the time the interval came, Praneeth's body language showed that he had resigned to his fate. Momota led 11-3 at the interval. Praneeth took just five more points and lost the second game 8-12.

Praneeth said that it was the unforced errors after the interval in the first game that brought his downfall. "I lost my rhythm after making four-five mistakes continuously after the break. He was also able to pick up all my attacks so I just blanked out," he told IANS.

(The above story first appeared on LatestLY on Aug 24, 2019 06:41 PM IST. For more news and updates on politics, world, sports, entertainment and lifestyle, log on to our website latestly.com).