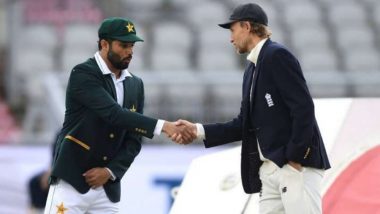 Azhar Ali shook hands with Joe Root at the toss ahead of England vs Pakistan, 1st Test 2020 which is currently underway in Manchester at the Old Trafford. The Pakistani skipper forgot about the norms of social distancing which are placed by the International Cricket Council (ICC) after the outbreak of the COVID-19. The Pakistani captain had a sheepish look after seeing the replays of himself shaking hands with the England skipper. Other laws imposed by the ICC include not using saliva on the ball and or even shaking hands with the players from the opposite teams. Pakistan vs England Live Score Updates 1st Test 2020 Day 1.

Prior to this, it was West Indies captain Jason who had mistakenly had shaken hands with England skipper Ben Stokes. The presenter then had reminded him about the social distancing norms set by the ICC. The netizens were quick enough to pick this particular moment and shared the same on social media. Check out the image below:

The moment Azhar Ali realised he left the oven on this morning.#ENGvPAK pic.twitter.com/TVq0U9CVrB

Talking about the current game, Pakistan won the toss and elected to bat first. The team has lost one wicket already in the form of Abid Ali who made way to the pavilion on the score of 16. It was Jofra Archer who had snapped the wicket of the Pakistani batsman. At the time of going online, the team was seven runs away from reaching a total of 50 runs. Shan Masood and Azhar Ali were the ones who were batting for the team on the score of 22 and 0 respectively.

(The above story first appeared on LatestLY on Aug 05, 2020 05:11 PM IST. For more news and updates on politics, world, sports, entertainment and lifestyle, log on to our website latestly.com).