England would be the favourites to win this match given their form while Bangladesh might just spring a surprise. However, it would take a huge effort from their end if they end up pulling off a win, which looks unlikely at the moment. 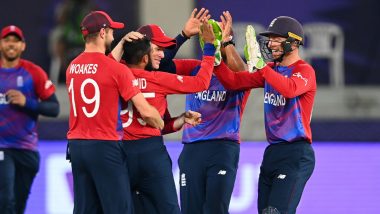 England are all set to take on Bangladesh in a Group 1 encounter of the Super 12 stage at the T20 World Cup 2021 on Wednesday, October 27. The match is scheduled to begin at 3:30 pm IST (Indian Standard Time) and would be played at the Sheikh Zayed Stadium in Abu Dhabi. England are riding high on confidence following a demolition of the defending champions West Indies in their first match of the tournament. It was an outright dominant win, other than a slightly nervy period of wobbly batting. Eoin Morgan, who earlier led the Kolkata Knight Riders to the IPL 2021 final, is very well-versed now with the UAE pitches and he has tactfully used that knowledge. Once again, his acumen with the captain's hat would be crucial for England when they face Bangladesh, who need to win to fight back in the competition. Mahmudullah's side suffered a setback at the hands of Sri Lanka, who inflicted a five-wicket defeat on them last weekend.  ENG vs BAN Preview: Likely Playing XIs, Key Battles, Head to Head and Other Things You Need To Know About T20 World Cup 2021 Match 20

Shakib Al Hasan, who has been their key to success, would have to step up once again with both bat and ball with Bangladesh also hoping that this time, they end up holding on to the catches and not dropping them at crucial junctures in the game. Defeating England might not look easy but it is something that they have to do, or else stare potentially at a premature exit from the competition. They already have a setback with pacer Mohammad Saifuddin being ruled out with injury. But they have got the experience of Rubel Hossain, who has named as Saifuddin's replacement. Hossain earlier starred in Bangladesh's victory over England in the 2015 World Cup and if he plays, well history can be repeated.  Pacer Rubel Hossain Replaces Injured Mohammad Saifuddin in Bangladesh T20 World Cup 2021 Squad

It is indeed surprising that Bangladesh and England would compete in their first-ever T20I today and well, since they have not played each other in the shortest format of the game, it would be a new experience for both sides. England are expected to win this match.

England vs Bangladesh clash in Group 1 of ICC T20 World Cup 2021 Super 12 stage will be played at the Sheikh Zayed Stadium in Abu Dhabi on October 27, 2021 (Wednesday). The game has a scheduled start time of 03:30 pm IST (Indian Standard Time).

Star Sports are the official broadcasters of T20 World Cup 2021 in India and will be telecasting the games live on its channels, Fans can tune into Star Sports channels to watch ENG vs BAN match telecast on their TV sets.

Disney+ Hotstar, the official OTT platform, will provide the live streaming of T20 World Cup 2021 on online platforms in India. Fans can tune into the Disney+ Hotstar app and website to watch England vs Bangladesh match online.

(The above story first appeared on LatestLY on Oct 27, 2021 11:22 AM IST. For more news and updates on politics, world, sports, entertainment and lifestyle, log on to our website latestly.com).