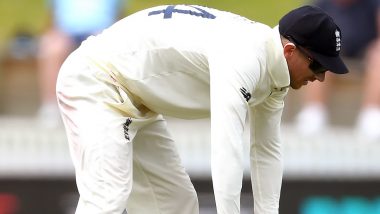 Southampton, July 31: England batsman Joe Denly has been ruled out of the Royal London Series against Ireland after suffering back spasms in training on Wednesday, a statement on England and Wales Cricket Board (ECB) website said. The Kent batsman has been replaced in the 14-man England ODI squad by Lancashire's Liam Livingstone. Livingstone has represented England in two IT20s and would make his ODI debut if selected in one of the final two matches against Ireland. In the first match, David Willey's maiden five-for, followed by an unbeaten half-century from Sam Billings helped England beat Ireland by six wickets.

Chasing a small target of 173 at the Ageas Bowl on Thursday, England suffered early hiccups, however skipper Eoin Morgan and Billings shared an unbroken 96-run partnership to see them across the line. England Announce 14-Man Squad for Ireland ODIs, Joe Denly and David Willey Included.

Earlier, Morgan won the toss and chose to bowl first in what was England's first ODI match since their dramatic tied match against New Zealand in the World Cup final on July 14, 2019 which led to them winning the title for the first time in their history.

Later, Willey said that he wasn't sure if an opportunity would come again for him after the last 12 months which saw him getting omitted from the World Cup squad at the 11th hour.

Willey was dropped on the eve of the World Cup, deposed by the qualities of Jofra Archer who played an instrumental role in England's maiden World Cup win. However, on Thursday, Willey took his maiden five-wicket haul.

"Obviously I've been part of the group for four years, so to miss out at the 11th hour (World Cup squad) was difficult," Willey said after the match at the Ageas Bowl. "For me it's about going out and enjoying every minute. Every opportunity could be the last one. "I want to play my best cricket when I'm enjoying it. Hopefully the results keep coming," he added.

(The above story first appeared on LatestLY on Jul 31, 2020 08:14 PM IST. For more news and updates on politics, world, sports, entertainment and lifestyle, log on to our website latestly.com).