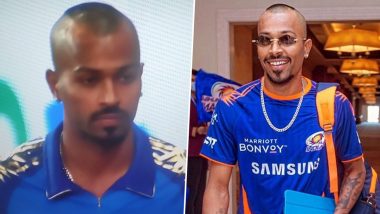 Hardik Pandya couldn’t make a significant mark against Kings XI Punjab as he got dismissed after scoring just eight runs at the Dubai International Cricket Stadium. More than his batting performance, however, the Mumbai Indians all-rounder caught the attention of the fans with his new hairstyle. Regarded as one of the most stylish cricketers going around, the Junior Pandya was sporting trendy hairstyle where he had some hair only the top while he was completely bald in the sides. Unsurprisingly, the dasher’s new look caught the attention of the fans, and social media got filled with different remarks. MI vs KXIP Score Updates Dream11 IPL 2020.

As far as the MI vs KXIP match in Dream11 Indian Premier League (IPL) 2020 is concerned, the four-time champions posted a competitive total of 176/6. Quinton de Kock scored an impressive half-century while Krunal Pandya, Kieron Pollard and Nathan Coulter-Nile played significant cameos. Hardik Pandya, who came in to bat at number six, looked in great touch as he smashed Ravi Bishnoi for a giant six in his very first delivery. However, Mohammed Shami accounted for his wicket soon as Pandya departed after scoring eight off four deliveries. Nevertheless, the star all-rounder still managed to create buzz with his look. A Look Back At 7 Pictures of Hardik Pandya!

It was football world cup, brazil 🇧🇷 star Ronaldo had that hair cut for his newborn baby, Hardik Pandya seems exactly did that. Or somewhat different. pic.twitter.com/65u7LbbKG4

Jadu is not happy with Hardik, said stop copying my style.#MIvKXIP pic.twitter.com/P4Ho2EjXfx

Although the total is a competitive one, restricting the in-form Kings XI Punjab batting line-up will take some beating. The likes of KL Rahul and Nicholas Pooran have been in excellent hitting form and must leave no stones to clinch the crucial game. On the other hand, MI will rely on Jasprit Bumrah, Trent Boult and Rahul Chahar to do the job with the ball.

(The above story first appeared on LatestLY on Oct 18, 2020 10:57 PM IST. For more news and updates on politics, world, sports, entertainment and lifestyle, log on to our website latestly.com).