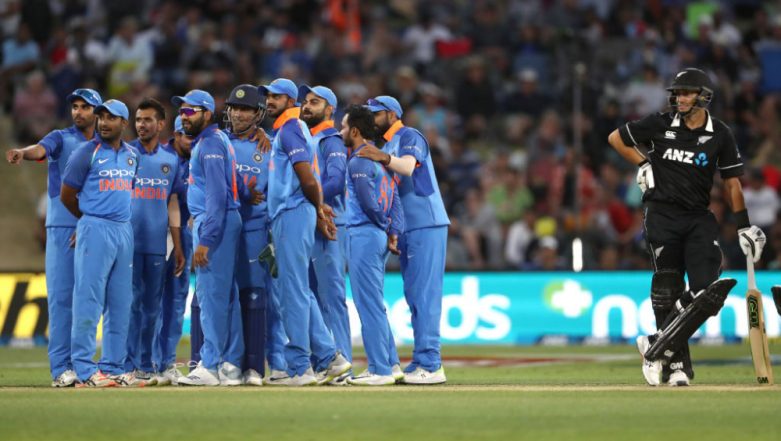 Hamilton, January 30: A confident India will aim to maintain their winning streak when they take on hosts New Zealand in the fourth contest of the five-match rubber at the Seddon Park here on Thursday.

The Indian team has already taken an unassailable 3-0 lead and will now be led by stand-in skipper Rohit Sharma as Virat Kohli has been rested for the last two matches.

The men in blue have been in great form recently. The Indian opening pair of Shikhar Dhawan and Rohit will once again lead the Indian batting attack and the duo have been the leading run scorers of the rubber with 169 and 160 runs respectively. IND vs NZ 4th ODI: Another Coveted 'Double' Awaits Skipper Rohit Sharma as India Eye Biggest Series Win.

Both the openers have been in fine form with two fifties in three games and will try to replicate their past performance. In the absence of Kohli, the middle order responsibility will be on Dinesh Karthik, Ambati Rayudu and Kedar Jadhav.

All the batsmen have done well in the series. However, Mahendra Singh Dhoni's participation is under the scanner as the stumper suffered a 'rare' injury, pulling his hamstring.

In the bowling department, the spinning duo of Yuzvendra Chahal and Kuldeep Yadav have been the major threat for the Kiwi batsmen. The two have been successful in picking up wickets at regular intervals and have also been economical.

In the pace attack, Bhuvneshwar Kumar and Mohammed Shami have been equally impressive.

On the other hand, Ross Taylor has been New Zealand's key run scorer in the series with 139 runs and has scored a century in India's previous meeting at this ground. Also, Kiwi skipper Kane Williamson has shown some resistance against the Indian bowling attack.

A lot will also depend on openers Colin Munro and Martin Guptill, who have failed to click so far.

In their bowling, Ish Sodhi has been replaced by Todd Astle for the last two games and the all-rounder is likely to make his way into the playing XI.

Pacer Trent Boult, who had four wickets in the last two games, has been the most effective for the Kiwis. He, along with Lockie Ferguson and Tim Southee, will shoulder the responsibility in the pace attack.

With the visitors already sealing the series, the men in blue will aim to continue their dominance while the hosts will try to salvage some pride.