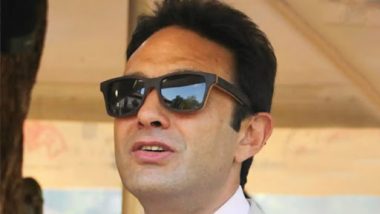 Dubai, September 22: Kings XI Punjab co-owner Ness Wadia has urged the Board of Control for Cricket in India (BCCI) to ensure "better" umpiring standards and make maximum use of the technology in the Indian Premier League (IPL).

This comes after the Kings XI Punjab lost their IPL 13 opener to Delhi Capitals in the Super Over on Sunday. RCB Funny Memes Trend Online After Virat Kohli-Led Team Register Surprise Win Over Sunrisers Hyderabad by 10 Runs During Dream11 IPL 2020 (Read Tweets).

During the 19th over of KXIP's innings when Mayank Agarwal and Chris Jordan were batting, the square leg umpire adjudged that a second run taken by England's Jordan was not complete. However, replays showed Jordan's bat had crossed the line.

"I would request BCCI to ensure better umpiring and to ensure henceforth that technology is used to the maximum so as to ensure fairness and transparency in a game which is known to be the best leagues in the world," Wadia said in a statement on Monday.

The Punjab-based franchise feel that the 'short run' call cost it the game.

"I feel it is unfortunate that Kings XI were the subject of poor decision-making by the umpire and this cost us the game. I do hope that BCCI implements a system and process so that the other teams do not suffer the same plight as Kings XI did yesterday," Wadia said.

"If technology is not there to be used for the fairness and transparency of the game and to ensure that it is equitable to all, then why use technology at all?" he questioned.

The Kings XI Punjab co-owner also drew reference to the other leagues and how technology was used there. "It is exceedingly unfortunate that today with tremendous use of technology, we still do not use technology to ensure the total fairness and transparency in cricket game like several other leagues across the world including EPL, NBA, etc."

"VAR has become something which is used across the world. The game of yesterday in question between Kings XI and Delhi had two umpiring mistakes which cost KXIP the game," he added.

According to Wadia, the first decision that went against Kings XI against Delhi Capitals "came in the first few overs of the match where a leg bye went for four and it was given as leg bye by the umpire but it was actually a wide ball".

"The second disastrous decision came at the end of the game in the last couple of overs, when a run was deemed as not being a run even though TV replays showed that it had been a run. Unfortunately these two decisions cost Kings XI the game," he said. Virat Kohli Shares RCB Appreciation Post After Team Defeats SRH by 10 Runs in Dream11 IPL 2020, Posts Pics After the Win.

Earlier, actress and co-owner of Kings XI Punjab Preity Zinta had also expressed her disappointment over the controversial decision.

"I travelled enthusiastically during a pandemic, did six days of quarantine and five Covid tests with a smile but that one short run hit me hard. What's the point of technology if it cannot be used? It's time BCCI introduces new rules. This cannot happen every year," she had tweeted.

"I've always believed in being graceful in a win or loss and in the spirit of the game but it's also important to ask for policy changes that improve the game in the future for everyone. The past has happened and it's imp to move on. So looking ahead and being positive as always," she added.

(The above story first appeared on LatestLY on Sep 22, 2020 11:19 AM IST. For more news and updates on politics, world, sports, entertainment and lifestyle, log on to our website latestly.com).