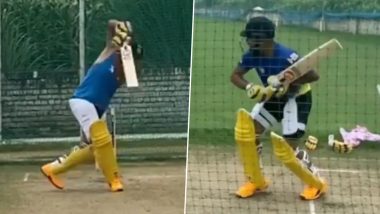 Chennai Super Kings (CSK) star Suresh Raina is raring to take the field in Indian Premier League (IPL) 2020 and that is evident in his latest Instagram post. The swashbuckling batsman shared a video from his training session in which he can be seen hitting the nets hard. Raina is certainly leaving no stones unturned and one can expect him to dominate the bowlers in the forthcoming tournament. With 5368 runs, the southpaw is the second-highest run-scorer in the history of the tournament and will eye to better his record even further in UAE. Suresh Raina Prepares for IPL 2020, Dons Chennai Super Kings’ New Kit.

“Doing what I love doing the most 💪 practice hard & get prepared! Can’t wait to get on the ground now. #whistlepodu,” wrote Raina while sharing the video on the picture-sharing website. Fans were ecstatic seeing Raina’s excitement for the tournament as they flooded the comment section with praises. Meanwhile, have a look at the post. Suresh Raina Pens Down A Heartfelt Note for MS Dhoni.

Doing what I love doing the most 💪 practice hard & get prepared! Can’t wait to get on the ground now. #whistlepodu

Raina, who played his last international match back in July 2018, is also eyeing to make a comeback in the Indian national team and a good performance in IPL 2020 might make his way easier. However, with the tournament being played in UAE, the 33-year-old will have to tackle a different challenge.

The pitches of Abu Dhabi, Dubai and Sharjah are known to favour the spinners while the boundaries are also on the larger side. Nevertheless, Raina has played in UAE before and he must make maximum utilization of the experience. Also, just like all the other teams, CSK is also expected to reach the base by the second or third week of August which will give them ample time to prepare for the tournament.

(The above story first appeared on LatestLY on Aug 06, 2020 04:41 PM IST. For more news and updates on politics, world, sports, entertainment and lifestyle, log on to our website latestly.com).