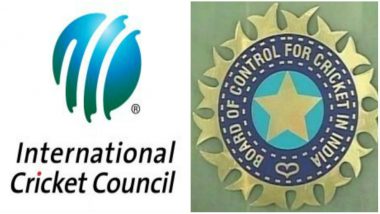 Confusion over ICC T20 World Cup 2020 to be held in Australia continues. And that has forced Board of Control for Cricket in India (BCCI) to wait. If ICC T20 World Cup 2020 is cancelled or postponed, then BCCI will have a window to organise Indian Premier 2020 (IPL 2020), which has been postponed indefinitely as of now. Meanwhile, the official broadcaster of both these events Star India has written separately to ICC and BCCI and has sought clarity on the tournaments. ICC T20 World Cup 2020 Latest Update: BCCI Unimpressed with Apex Body's 'Wait and Watch' Approach Regarding the Cricket Tournament.

According to a report by InsideSport, Star India has said that further delay on the decision regarding holding T20 World Cup and IPL 2020 will ‘undermine its position to monetise the said rights’. The official broadcaster wants clarity on which tournament will take place so that it can plan its marketing accordingly.

“Star India is understandably miffed with the situation. These are no small rights, huge commercial values are attached to it. For IPL Star has to collect 3000 crore from the market, it can’t be monetised at the drop of hat. Market anyway is very tough, schedules should be finalised ASAP or Star will have to face big loss on account of this delay. Same goes with ICC World Cup, the outlays are very big for that as well,” InsideSport quoted a source as saying. ICC T20 World Cup 2020 Latest Update: Fate of the Cricket Tournament Likely to Be Decided by Mid-July.

The report further states that Star India has requested BCCI to reduce the rights fee for the IPL 2020 edition. The cricket board, however, has not responded to it yet. Apart from holding the global media rights of IPL for five years, Star India is also the official broadcaster of Indian cricket. The broadcaster also has rights for all ICC tournaments till 2023.

(The above story first appeared on LatestLY on Jun 27, 2020 06:56 PM IST. For more news and updates on politics, world, sports, entertainment and lifestyle, log on to our website latestly.com).