The Delhi franchise, which reached the second qualifiers last year, have reportedly narrowed down on the players to retain ahead of the IPL 2022 Mega Auction. The last date for all teams to retain players is November 30. 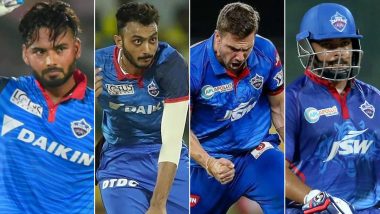 Delhi Capitals reportedly have decided on their retentions ahead of the IPL 2022 Mega Auction and the ones they have picked to retain are captain Rishabh Pant, Anrich Nortje, Prithvi Shaw and Axar Patel. This means that the likes of Avesh Khan, Shreyas Iyer, Ravichandran Ashwin and Kagiso Rabada among other names in the Delhi Capitals camp are either going to be brought by either of the two new teams or head to the mega-auction. According to reports, Iyer, who had a successful Test debut against New Zealand, has chosen to enter the mega-auction. The 26-year old right-hander had taken up captaincy of the Delhi franchise midway in 2018 after Gautam Gambhir stepped down from that role and led them to the final in 2020. He was replaced by Pant as captain ahead of the 2021 season as he was ruled out with a shoulder injury. IPL 2022 Mega Auction: Ravi Ashwin Hints at Delhi Capitals Not Retaining Him and Shreyas Iyer

The choice between Rabada and Nortje perhaps was a tough one for Delhi. Out of the two South African fast bowlers, Nortje has been the most impressive, especially in the second leg of the competition. He consistently took wickets in the powerplay and also bowled at express pace regularly, doing well in the T20 World Cup 2021 which ended earlier this month. Rabada on the other hand has been representing Delhi since 2018 and has more IPL experience as compared to his compatriot. He too has had a decent IPL season.

These retentions mean that Delhi would not have to look for a captain and an opener. Also, with Axar Patel in the mix, Capitals have a quality all-rounder who can bowl pretty economically and also hit the big ones when needed. IPL 2022 Mega Auction Rules, Retained Players List, Date and Deadlines: Check Out Retention Policy for Indian Premier League Franchises

Delhi also surprisingly let go of Shikhar Dhawan, who was one of the most consistent openers last year, scoring 587 runs in 16 games. However, with the option to retain four players, it is understandable that they wanted to bank on the young Shaw and possibly build the batting with him at the top. Although no formal announcement regarding these retentions have been made yet, Delhi have reportedly narrowed down on these four players. The last date for all teams to retain players is November 30.

(The above story first appeared on LatestLY on Nov 25, 2021 11:49 PM IST. For more news and updates on politics, world, sports, entertainment and lifestyle, log on to our website latestly.com).