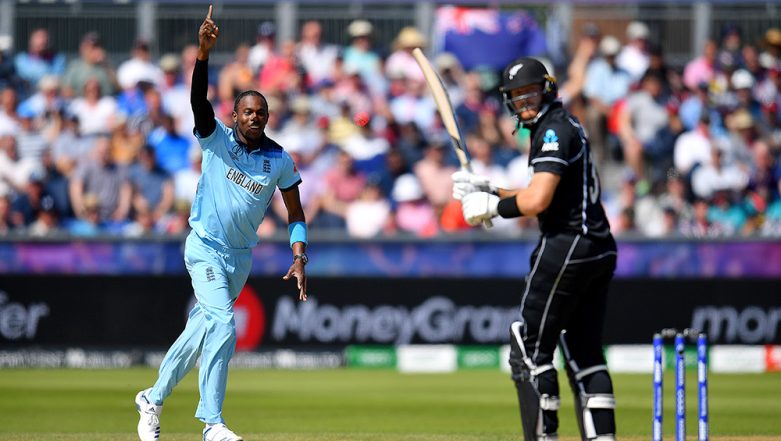 Jofra Archer overtook English Ian Botham to become the England bowler with most wickets in a single edition of the World Cup. Archer also now has second highest wicket-taker in ICC Cricket World Cup 2019 with already 17 wickets to his from nine games. He reached the milestone after dismissing New Zealand opener Martin Guptill during the ENG vs NZ game at Riverside in Durham. England vs New Zealand Highlights.

Archer, who was included in the final 15-member World Cup squad after being initially left out of the preliminary squad, has been on fire for the hosts with already five 3-wicket hauls to his name. He is also the leading wicket-taker for England in the ongoing edition of the World Cup and is only behind Australian Mitchell Starc (24 wickets) in the list of highest wicket-takers in CWC 2019.  Jos Buttler Takes a Stunning Catch to Dismiss Martin Guptill During ENG vs NZ CWC19 Match, Watch Video.

Ian Botham held the record for 27 long years before Archer broke it. Botham had taken 16 wickets in the 1992 edition of the World Cup. But Archer has one more than the legendary English all-rounder with at least one more game to play in CWC 2019. Another English all-rounder Andrew Flintoff is third in the list with 14 wickets to his name He had reached the feat in 2007. Glenn McGrath (26 wickets) holds the record for taking most wickets in a single edition of the World Cup in the tournament’s history.

Mark Wood, who returned with figures of 3/34 is sixth in the illustrious list with 13 wickets, while Vic Marks V Marks and Eddie Hemmings with 13 wickets each in 1983 and 1987 are fourth and fifth in the list.

Meanwhile, England thrashed New Zealand by 119 runs to qualify for the semi-finals. They became the third team after defending champions Australia and India to reach the final four stage. New Zealand despite the heavy defeat are still in contention for qualifying. They can do so if Pakistan fails to beat Bangladesh by more than 316 runs. England are placed third with 12 points from nine games, while New Zealand from the same no of matches has 11 points. Pakistan have played a game less and are on nine points.