With a spot in the final at stake, both sides would be aiming to put their best foot forward and not make too many mistakes. Delhi however are at a slight disadvantage, having lost the last two of their matches while Kolkata have had a season of resurgence to remember. Who would come up with the win--would it be Eoin Morgan's Knight Riders or Rishabh Pant's Delhi Capitals? 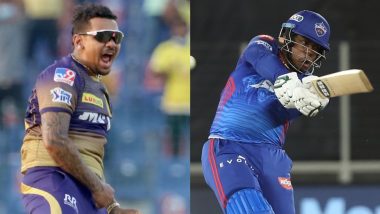 After a thrilling win over Royal Challengers Bangalore in the IPL 2021 Eliminator, Kolkata Knight Riders (KKR) now head to face Delhi Capitals (DC) in Qualifier 2 on Wednesday, October 13. The match would be played at the Sharjah Cricket Stadium in Sharjah and Kolkata would have a slight advantage as they have played at this venue in their last two games and have done well here in the UAE leg of the competition this year. However, Delhi would be aiming to return to winning ways after a narrow loss against Chennai Super Kings in the first Qualifier 1. With a spot in the final vs Chennai Super Kings on the line, it would be an intense clash in Sharjah.KKR vs DC Preview: Likely Playing XIs, Key Battles, Head to Head and Other Things You Need To Know About VIVO IPL 2021 Qualifier 2

Both teams have a lot of match-winners in their ranks and it is a testament to their current position in the competition. While Delhi Capitals made it easily to the playoffs, Kolkata had to do it the hard way, putting together a resurgent performance in the UAE leg of IPL 2021 to make it this far. Fans who make Dream11 Fantasy teams regularly would know that a captain fetches double points while the vice-captain multiplies points x1.5 times. Let us take a look at the recommended picks for the captain and vice-captain's slot for this match. KKR vs DC, Sharjah Weather, Rain Forecast and Pitch Report: Here’s How Weather Will Behave for Kolkata Knight Riders vs Delhi Capitals IPL 2021 Qualifier 2 at Sharjah Cricket Stadium

The West Indies all-rounder is in red hot form and a proper demonstration of it was during the Eliminator against Royal Challengers Bangalore. He not only got rid of the star players like Virat Kohli, Glenn Maxwell and AB de Villiers but also struck three sixes in one over to turn the match in Kolkata's favour. With his all-round show, especially in Sharjah where the ball grips and turns, he would once again be a very important player for KKR and recent form suggests that he should be made captain of your fantasy teams.

Another West Indian in this fantasy team who would be apt for becoming vice-captain of your fantasy teams in Shimron Hetmyer, who has been in good form for the past few games. Even in Qualifier 1 against Chennai Super Kings, he took little time to settle and unleashed an array of attacking shots once he got his eye in, scoring 37 crucial runs in a competitive total. He would once again be a player to watch out for in the second qualifier.

(The above story first appeared on LatestLY on Oct 12, 2021 10:01 PM IST. For more news and updates on politics, world, sports, entertainment and lifestyle, log on to our website latestly.com).