Kings XI Punjab bagged a lot of limelight in IPL 2020 with their roller coaster journey. They looked entirely down and out after losing six of their first seven games. However, the KL Rahul-led side made a sensational comeback by winning five games on the trot. 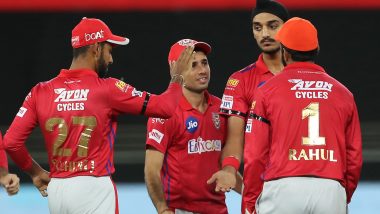 Kings XI Punjab released Glenn Maxwell, Mujeeb ur Rahman and seven other players while retaining their core for the next edition of the Indian Premier League. As many as 16 players were retained by the franchise ahead of IPL 2021 players auctions with Chris Jordan, Sarfaraz Khan, Murugan Ashwin among those retained for the next season. Below, we’ll look at the full list of released and retained players by the Punjab-based side. IPL 2021: Full List of Players Released and Retained Ahead of Indian Premier League Season 14 Auction.

A day after India’s historic Test series triumph in Australia, the focus has been shifted to the Indian Premier League (IPL) 2021. Ahead of the mini IPL auction on February 11, all the teams have announced the list of their retained and released players on Wednesday (January 20). The decision was taken based on the players’ performances in IPL 2020, which concluded on November 10. While some team retained their core strength, others made massive changes in the squad. Kings XI Punjab (KXIP) also made some interesting decisions ahead of the mini auctions. . IPL 2021 Players' Auction: February 4 Registration Deadline; No Player Agent Allowed.

#IPL2021 will 👀 these Kings play for us again! 😍#SaddaPunjab pic.twitter.com/L3a53VQsw5

Kings XI Punjab bagged a lot of limelight in IPL 2020 with their roller coaster journey. They looked entirely down and out after losing six of their first seven games. However, the KL Rahul-led side made a sensational comeback by winning five games on the trot. Unfortunately, they couldn’t qualify for the playoffs as they finished the tournament at the sixth position. More than anything else, their tendency to choke under pressure let them down in several games. However, they’ll like to put a better show in the upcoming season.

Anil Kumble Reveals Reason Behind Releasing Glenn Maxwell and Others

"The plan was to retain the core" - Head Coach @anilkumble1074 on the players retained, released and more... 🗣#IPL2021 #SaddaPunjab pic.twitter.com/1dGj79pum9

The Mohali-based side have made some interesting decisions ahead of the auctions. While they have retained the likes of KL Rahul, Mayank Agarwal, Nicholas Pooran and Mohammed Shami, the likes of – Glenn Maxwell and – Sheldon Cottrell have been released ahead of the tournament. Now, it will be interesting to see what Punjab will look for in the auctions. Meanwhile, let’s look at the full list of players released and retained players by KXIP.

Meanwhile, IPL 2021 is expected to take place in India during March-April. The tournament will be crucial for the players as the ICC T20 World Cup 2021 will take place in India later this year. Hence, players of all teams will have a great chance to assess the conditions and impress the national selectors.

(The above story first appeared on LatestLY on Jan 20, 2021 08:28 PM IST. For more news and updates on politics, world, sports, entertainment and lifestyle, log on to our website latestly.com).