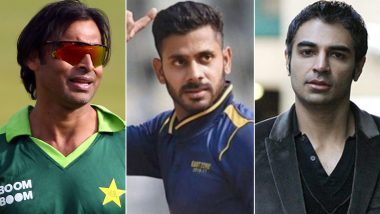 Many Pakistan cricket stars like Shoaib Akhtar and Salman Butt have been bagging a lot of limelight for their recent statements which ignited many controversies. Akhtar claimed that BCCI’s financial power made the T20 World Cup postponed so that Indian Premier League (IPL) 2020 can take place. While, Salman Butt, who was banned from international cricket for his involvement in spot-fixing in 2010, criticized England pacer Jofra Archer for breaching bio-secure protocol rules. Well, these statements certainly didn’t go down well with veteran Indian cricketer Manoj Tiwary as he took to Instagram and slammed Akhtar, Butt. He also criticized Waqar Younis who said that Pakistan players will not follow Virat Kohli’s fitness standards.

Tiwary, who has played for four different franchises, shared the news of all the sensational remarks made by the Pakistan cricket stars. “Just look at these statements. Damn So much of jealousy. Salman butt, u don’t have the right to speak on rules nd regulations I just wish God will bless them wit some sense,” wrote Tiwary while sharing the statements of Pakistan cricket stars. Have a look. Shoaib Akhtar Recalls Moment When He Stormed Into Harbhajan Singh’s Hotel Room After Altercation During IND vs PAK Asia Cup Match.

Just look at these statements. Damn So much of jealousy. Salman butt, u don’t have the right to speak on rules nd regulations 😂 I just wish God will bless them wit some sense 👍

Well, this was, however, not the very first time when Tiwary lashed out a Pakistan cricketer for his statement against India. During 2017 Champions Trophy, the former Bengal captain lashed out at former Pakistan wicket-keeper Rashid Latif for criticizing Virender Sehwag.

Speaking of cricket action, IPL 2020 is set to get underway on September 19 while the finals will be played on November 8. This time, however, the tournament will take place in UAE owing to the COVID-19 crisis in India.

(The above story first appeared on LatestLY on Jul 28, 2020 01:15 PM IST. For more news and updates on politics, world, sports, entertainment and lifestyle, log on to our website latestly.com).