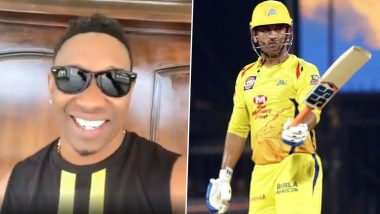 India’s legendary wicket-keeper batsman MS Dhoni celebrates his 39th birthday on Tuesday (July 7, 2020) and wishes are pouring in for him from all around the world. On the occasion, West Indies and Chennai Super Kings (CSK) all-rounder Dwayne Bravo also showcased his love for the former Indian captain by releasing his new song ‘Helicopter 7.’ Many fans from all around the world were eagerly waiting for the song to song to come as Bravo shared several teasers of the song through his Instagram page. The track is already getting great response from the fans as Bravo has brilliantly showcased Dhoni’s journey to success. MS Dhoni Birthday Special: Huge Sixes by Former Indian Captain That Will Leave You Jaw-Dropped.

From talking about his days as a ticket collector to thanking Sourav Ganguly for promoting him at number three, the song has moments which can well give you goosebumps. In fact, in the video, the Caribbean star can also be seen imitating Dhoni’s famous helicopter shot which has given nightmares to many prominent bowling line-ups. MS Dhoni Birthday Special: Times When Former Indian Captain and His Daughter Ziva Dazzled Social Media.

"So the wait is over!! you’re truly a great inspiration to a lot of ppl around the world as we get ready to celebrate you birthday on behalf of my team, my fans and your fans we wish you gods blessings the helicopter is off," wrote Bravo while sharing the video on his Instagram Page.Meanwhile, as the talismanic cricketer turns a year older, let’s look at DJ Bravo’s tribute to him.

So the wait is over!! @mahi7781 you’re truly a great inspiration to a lot of ppl around the world 🌎 as we get ready to celebrate you birthday 🎂 on behalf of my team, my fans and your fans we wish you gods blessings 🙏🙏 the helicopter 🚁 is off!! 🔥🔥🔥 go check it out guys on YouTube and also available on all platforms #Helicopter #7 #Champion @sakshisingh_r @djanamusic @ultrasimmo @arielle.alexa @dexterrthomas @collegeboyjesse @wmglabrecords @yeraga 🇹🇹🇹🇹

The video has already crossed over 1 lakh views and the number wi ll certainly increase with time. Bravo, who joined CSK in 2011, has played a lot of cricket with the Ranchi-born cricketer and needless to say, the duo shares a great bond. In fact, just like many other cricket stars, Bravo also credits MS Dhoni for bringing the best out of him. Well, fans might see the two stars joining forces again if BCCI manages to conduct the 2020 edition of the Indian Premier League (IPL) later this year.

(The above story first appeared on LatestLY on Jul 07, 2020 08:36 AM IST. For more news and updates on politics, world, sports, entertainment and lifestyle, log on to our website latestly.com).