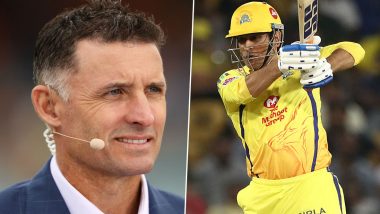 Chennai Super Kings (CSK) skipper MS Dhoni will make a much-awaited comeback in the 2020 edition of the Indian Premier League (IPL). The wicket-keeper batsman hasn't played professional cricket since the 2019 World Cup, and it will be interesting to see how'll perform in the marquee tournament. For the majority of his career, the dashing batsman has batted at the fifth and sixth position, playing the finisher role. However, CSK's batting coach Michael Hussey believes that the 39-year-old should bat at number four in IPL 2020 as it will be the ideal position for him. IPL 2020 Team News: MS Dhoni Reunites With Suresh Raina, Piyush Chawla & Other CSK Teammates Ahead of Training Camp.

"No. 4 is ideal for MS Dhoni to bat, but everyone in the middle-order will need to adapt as per the situation. Not sure yet what the make-up of the team will be. Just focused on the preparation phase at the moment," Hussey said in an interaction with The New Indian Express. CSK Squad for IPL 2020 in UAE: Check Updated Players' List of Chennai Super Kings Team Led by MS Dhoni.

The former Australian and CSK batsman also opined that adapting to the new conditions will be challenging, but the players and support staff must follow the rules and norms. "Very excited about the tournament going ahead and interested to see how it will all go with no crowds and staying in a strict bio-secure bubble. It will definitely not be easy, but we must be disciplined and stick to the rules for the benefit of everyone's health," he added.

CSK, the three-time IPL champions, finished the last season as runner ups but will like to cross the final hurdle this time around. They are set to leave for Dubai on August 21. Before that, however, the players of the team will train in a five-day conditioning camp at the Chepauk Stadium in Chennai.

(The above story first appeared on LatestLY on Aug 15, 2020 04:45 PM IST. For more news and updates on politics, world, sports, entertainment and lifestyle, log on to our website latestly.com).