Carlos Brathwaite played a brave innings at the end to take West Indies close to the target and send shivers down the New Zealand spine through his brilliant hundred. But West Indies fell five runs short as he holed out to Boult near the boundary line. Nonetheless, Brathwaite won the hearts of cricket fans for his astonishing innings. 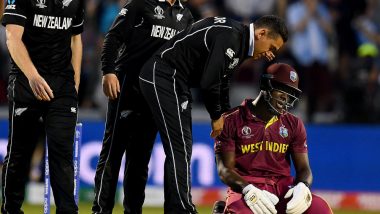 The New Zealand won the match against West Indies by just five runs but they will feel lucky that Carlos Brathwaite was dismissed by Neesham and a good catch taken by Boult at mid-on boundary line. The Black Caps defeated West Indies by 5 runs in match 29 of the ICC Cricket World Cup 2019 at Old Trafford, Manchester. Twitter has gone berserk over Carlos Brathwaite hundred and his valiant effort which took West Indies to the brink. West Indies vs New Zealand Highlights, ICC Cricket World Cup 2019: NZ Beat WI by 5 Runs, Move to Top of Points Table.

After put in to bat first by West Indies skipper Jason Holder, New Zealand lost both its openers, Martin Guptill and Colin Munro for first ball duck as Sheldon Cottrell picked two wickets in the first over. However, Kane Williamson and Ross Taylor stitched together a 160 runs partnership to get the Kiwis back into the match. Kane Williamson hit 148 runs despite Cottrell's brilliant show with the bowl. New Zealand finished 291/8 in 50 overs. Carlos Brathwaite Heroic Maiden ODI Century Goes in Vain As West Indies Suffer Five-Run Loss Against New Zealand in ICC Cricket World Cup 2019.

What a match! And what a win for New Zealand!

Williamson set it up with his century, but despite a collapse, West Indies nearly pulled it off with Brathwaite's unbelievable 82-ball 101!

Brathwaite Almost Pulled Off a Miracle

WHAT. A. MATCH. We will remember thy name forever, Carlos Brathwaite! #WhistlePodu #WIvNZ #CWC19

Surely One of the Best Matches Ever

West indies from 170/8 to 286/10 they lost match by 5 runs but Carlos brathwaite won heart ❤ pic.twitter.com/oVnjg7lHDh

The Misbah and Brathwaite Moment

These two matches and these two pictures will always be remembered. Misbah and Carlos Brathwaite. pic.twitter.com/bQM7WEDY6o

He Won All The Hearts

Coming out to bat in reply, West Indies looked good as Chris Gayle and Shimron Hetmyer put together a 100 runs partnership. Gayle was dismissed for 87  off 84 balls. However, a middle order collapse saw West Indies losing five wickets for just 38 runs between 21 to 30 overs.

However, Carlos Brathwaite played a brave innings at the end to take West Indies close to the target and send shivers down the New Zealand spine through his brilliant hundred. But West Indies fell five runs short as he holed out to Boult near the boundary line. With this victory, New Zealand have gone to the top of the points table.

(The above story first appeared on LatestLY on Jun 23, 2019 03:07 AM IST. For more news and updates on politics, world, sports, entertainment and lifestyle, log on to our website latestly.com).