Tom Latham's side are without some of their main players and it would take a mammoth effort from them to outplay the Pakistan side, who would be the favourites to win the series. Also, New Zealand suffered a last-minute injury blow with Tom Blundell being ruled out and Daryl Mitchell being named his replacement. 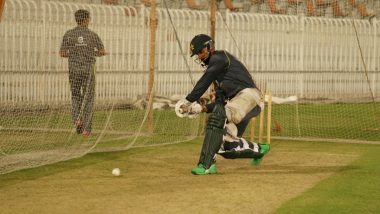 Pakistan would be hosting New Zealand for a three-match ODI series, the first of which gets underway on September 17, Friday. New Zealand, who are touring Pakistan after a gap of 18 long years, would be without most of their main players, the likes of which include Kane Williamson, Kyle Jamieson and Trent Boult amongst others and so, it is indeed a great opportunity for the hosts to capitalise and potentially dominate the series. However, no matter who wins the series, this series would have no impact on the World Cricket League. This happened as a result of the Pakistan Cricket Board not being able to ensure the availability of the Decision Review System (DRS) technology for this series. However, this series still promises to be a thrilling one, because the visitors wouldn't possibly have the burden of expectations weighing on them, owing to the fact that they are fielding a depleted side for the series. PCB Rubbishes Reports of Babar Azam Being Unhappy With Team Environment, Suggests All is Well in the Team

Pakistan on the other hand, would be keen on making a mark in this series and with home advantage, they would be favourites for the win. The last ODI series between these two sides had ended in a 1-1 draw. This time, New Zealand would hope for a spirited performance from its inexperienced side after failing to make a mark against Bangladesh. But Pakistan would be no easy opponents.

PAK vs NZ 1st ODI Test, Dream11 Prediction: Wicket-Keepers -Tom Latham (NZ) can be the wicket-keeper in your Dream11 PAK vs NZ team.

PAK vs NZ 1st ODI, Dream11 Prediction: All-Rounders – Rachin Ravindra (NZ) and Shadab Khan (PAK) can be picked as the all-rounder in your team.

Babar Azam (PAK) can be named as the captain in your PAK vs NZ Dream11 Team while Tom Latham (NZ), can be selected as the vice-captain.

(The above story first appeared on LatestLY on Sep 16, 2021 04:43 PM IST. For more news and updates on politics, world, sports, entertainment and lifestyle, log on to our website latestly.com).