Pakistan Squad to Leave for England Tour on June 28, Shoaib Malik to Join on July 24 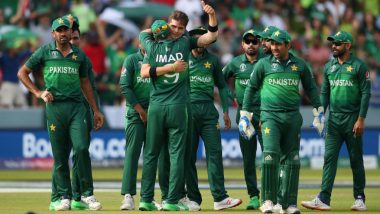 Lahore, June 20: A 29-member Pakistan squad will leave for England on June 28, Pakistan Cricket Board (PCB) said in a statement on Saturday.

However, veteran former captain Shoaib Malik will be joining the squad only on July 24 after spending time with his wife and son. The tour will consist of three T20Is and as many Tests towards the end of July.

The PCB said that the team will be quarantined in Derbyshire for 14 days, under restrictions in place for the coronavirus pandemic, but will be allowed to practice during that period. Mohammad Hafeez, Pakistan All-Rounder, Says He Will Be Available Even if T20 World Cup Is Postponed.

"Apart from training, there will be intra-squad matches to compensate for the lack of practice matches due to non-availability of local teams as the ECB is yet to commence its domestic season," said the PCB.

Shoaib has been separated from his wife and Indian tennis star Sania Mirza and son Izhaan throughout the period of lockdown and has hence been allowed to spend time with them before joining the team.

"Unlike the rest of us, Shoaib Malik has not seen his immediate family for nearly five months due to his commitments and the subsequent international travel bans following the Covid-19 pandemic," said PCB Chief Executive Wasim Khan.

"As travel restrictions are now slowly easing out and there is an opportunity for a family reunion, it is appropriate that at a human level we show compassion as part of our duty and respect Shoaib's request," he added.

(The above story first appeared on LatestLY on Jun 20, 2020 06:02 PM IST. For more news and updates on politics, world, sports, entertainment and lifestyle, log on to our website latestly.com).