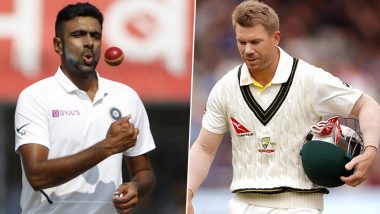 Netizens went in a frenzy when the Indian government announced ban on TikTok and 58 other Chinese apps amid the ongoing row with China. Following the ban, Indian spinner Ravichandran Ashwin took to his official Twitter account and poked fun at Australian opener David Warner who has been frequently intriguing TikTok videos. “Appo Anwar? @davidwarner31,” tweeted Ashwin which apparently means “What will you do now.” However, the spinner’s remarks over Warner didn’t go down well with a social media user as he commented: “You were not raised properly.” However, the cool and calm Ashwin issued clarification over his previous tweet and said that his respect for the southpaw is still intact. TikTok, UC Browser Among 59 Chinese Apps Banned by Govt of India Amid Row With China, See Full List.

“It’s a light hearted banter in Tamil. Can be so easily missed due to context and language barrier. I appreciate you being a @davidwarner31 fan, my respect for him is still intact. Tc,” wrote the 33-year-old while replying to the fan’s comment. Several fans were impressed by the spinner’s gesture and they praised him from head to toe. Have a look.

It’s a light hearted banter in Tamil. Can be so easily missed due to context and language barrier. I appreciate you being a @davidwarner31 fan, my respect for him is still intact. Tc

Warner made his debut on the popular video-making app amid the COVID-19 lockdown. Due to his massive popularity in India, the southpaw has made numerous TikTok videos where he can be seen dancing to Hindi, Tamil and Telugu songs. Hence, he bagged a lot of attention when TikTok was banned.

During an interaction, the southpaw said that he makes the videos in order to entertain his fans. "We have to think out of the box. For me, it was about putting smiles on the people's faces. Through TikTok, Twitter, and Instagram, my family and I have been able to do that," said the 33-year-old while talking to India Today.

(The above story first appeared on LatestLY on Jun 30, 2020 10:33 PM IST. For more news and updates on politics, world, sports, entertainment and lifestyle, log on to our website latestly.com).