RCB vs KKR IPL 2020 Dream11 Team: Virat Kohli, Sunil Narine and Other Key Players You Must Pick in Your Fantasy Playing XI

Both teams have enjoyed a sensational run in the season so far and will like to get another victory under their belt. With four wins in six games, KKR and RCB are placed at third and fourth position in the team standings, and one can expect an exciting contest in the upcoming fixture. 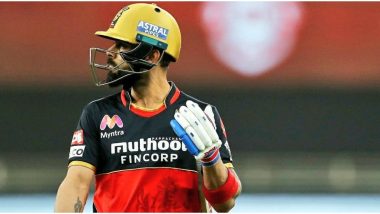 Royal Challengers Bangalore will take on Kolkata Knight Riders in the match 28 of the Dream11 Indian Premier League (IPL) 2020. The encounter takes place at the Sharjah Cricket Stadium on October 12 (Monday). Both teams have enjoyed a sensational run in the season so far and will like to get another victory under their belt. With four wins in six games, KKR and RCB are placed at third and fourth position in the team standings, and one can expect an exciting contest in the upcoming fixture. RCB vs KKR Dream11 Team Prediction IPL 2020.

Fresh from a match-winning 90-run knock against Chennai Super Kings, the RCB skipper will be raring to make a mark once again. Though the right-handed batsman didn’t emphatically start the tournament, he gained form in the latter half and played a couple of crucial knocks. Notably, Kohli also scored a century against KKR last year and will not mind crossing the three-figure mark again.

Kohli’s partner-in-crime AB de Villiers has also done enough to be inducted in your fantasy team. Alongside tormenting the bowlers in the end overs, the former South African captain has also stabilized the innings after the top-order collapsed. With De Villiers also keeping wickets now, his dismissals behind the stumps will fetch you even more points.

Chahal has arguably been the most impressive spinner in IPL 2020 so far. He has continuously troubled opposition with his turning deliveries, and the bucket of variations in his armoury makes him even more lethal. With boundaries in Abu Dhabi being on the larger side, hitting Chahal for boundaries will take some beating from KKR batsmen.

The youngster has performed consistently and played a crucial role in KKR’s success so far. With 220 runs, Gill is Kolkata’s leading run-scorer so far and will like to enhance his tally even further this year. Though the rising star has to work on his strike rate, he still deserves to be in your fantasy team.

Narine’s sensational spell against Kings XI Punjab guided KKR to victory from the jaws of defeat. The Caribbean star might have failed to make an impact with the bat, but he’s still an asset with the white-ball in hand. Just like Chahal, the mysterious off-spinner will also enjoy bowling in the large boundaries of Abu Dhabi.

With both sides coming off a victory from their last game, a great contest is on the cards. However, one can place their bet on RCB to win the game as they have looked more balanced all-round side than the Knight Riders.

(The above story first appeared on LatestLY on Oct 11, 2020 05:56 PM IST. For more news and updates on politics, world, sports, entertainment and lifestyle, log on to our website latestly.com).