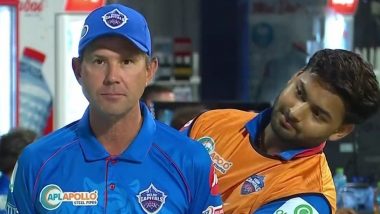 Rishabh Pant was seen videobombing Delhi Capitals’ head coach Ricky Pointing while the former Australian great was seen giving an interview on the television while team Delhi Capitals battled it out in the middle against the Chennai Super Kings in the IPL 2020. The video of the incident went viral on social media. Many social media users put out their best of creative brains and posted funny memes on social media. A few others found it really funny and the netizens were divided over Pant’s act. The wicket-keeper batsman has been rested from the squad due to hamstring disorder. Shikhar Dhawan, Axar Patel Hailed by Netizens After The Duo Leads Delhi Capitals to 5-Wicket Win Over Chennai Super Kings (Read Tweets).

He remained on the bench since the last two matches. Talking about Delhi Capitals, the team kept up their winning streak with a five-wicket win against the Chennai Super Kings. Shikhar Dhawan scored an unbeaten knock of 101 runs and played a vital role in helping DC win the match, But in the end, it was Axar Patel who slammed three sixes when the team needed 15 runs from five balls. Now, let's have a look at the video and the reactions.

I want someone to look at me the way Rishabh Pant is looking at Ricky Ponting#CSKvsDC pic.twitter.com/ty3V6iWpK4

Talking about Delhi Capitals, they won the game by five runs and topped the IPL 2020 points table with 14 points in their kitty. The team has so far lost only a couple of games in Dream11 IPL 2020.

(The above story first appeared on LatestLY on Oct 18, 2020 01:02 AM IST. For more news and updates on politics, world, sports, entertainment and lifestyle, log on to our website latestly.com).