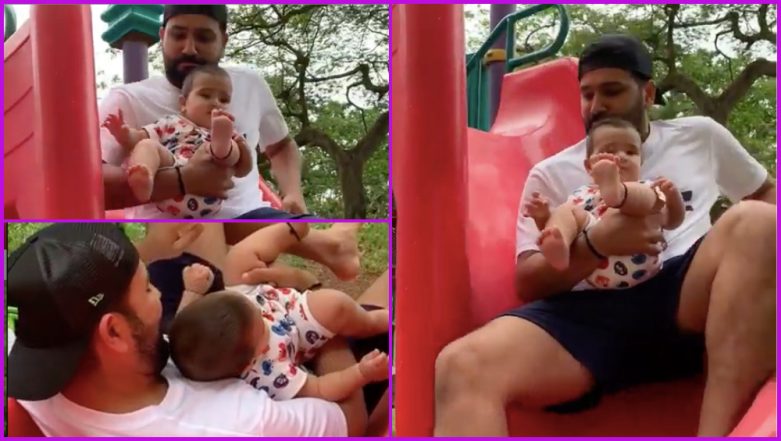 Before leaving for West Indies tour, Indian cricket team’s opening batsman and vice-captain Rohit Sharma spend a day out with daughter Samaira. Team India is scheduled to leave for the Caribbean on Monday for a full-fledged series, which begins on August 03. Ahead of the departure, Rohit was seen enjoying a garden slide ride with his daughter in Mumbai. Rohit Sharma and Wife Ritika Sajdeh Watch The Lion King Movie, Indian Cricketer Posts Picture on Instagram (See Pic).

The Indian opener took to Instagram and uploaded a video as well. Rohit was seen carrying Samaira in his lap as he took a slide. The cricketer admitted that he was a little scared. “Making the most of our Sunday and yes I was a little scared,” wrote Rohit in the caption of the video.

The video has gone viral has had over four lakh views within 40 minutes after being uploaded. The Indian cricketer has many fans and on Instagram, he is followed by over 10 million. Anushka Sharma Posts Cryptic Instagram Story After Rohit Sharma Unfollows Virat Kohli and Her on the Social Networking Site.

Rohit has been named in all three squads for the West Indies tour. The right-handed batsman was the top run-scorer at the ICC Cricket World Cup 2019 with 648 runs from nine matches. The 32-year-old also smashed five centuries in the tournament. India vs West Indies Series 2019 Schedule in IST, Free PDF Download: Get Fixtures, Time Table With Match Timings and Venue Details of India's Tour of West Indies.

Meanwhile, India’s tour of West Indies kicks-off with the three-match T20I series on August 03. Following it, the teams will face-off in three One-Day Internationals (ODIs) on August 08, 11 and 14. The month-long tour then ends with two Test in Antigua and Jamaica. Recently, Rohit was in the news due to the rift with Indian captain Virat Kohli following the exit from World Cup. However, nothing substantial has come out in the public and all is based upon speculations.