RR vs RCB IPL 2022 Qualifier 2 Dream11 Team: Rajat Patidar, Yuzvendra Chahal and Other Key Players You Must Pick in Your Fantasy Playing XI

Dream11 is one of the popular fantasy games and has become quite popular among its users as it allows them to earn real cash, and a great way to do qthat is by picking the right fantasy playing XI. So here are some players you must-have in your RR vs RCB IPL 2022 Dream11 Team. 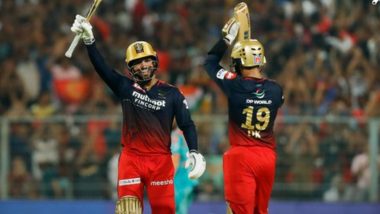 Fight for the final ticket of IPL 2022 will see the Rajasthan Royals (RR) and Royal Challengers Bangalore (RCB) at odds with each other on Friday, 27 May 2022 at 07:30 PM. The match will be played at Narendra Modi Stadium in Ahmedabad, Gujarat. Both the teams possess remarkable game-changers who can fancy the trouble for the opponent and come through the set of difficult situations with ease. Dream11 is one of the popular fantasy games and has become quite popular among its users as it allows them to earn real cash, and a great way to do qthat is by picking the right fantasy playing XI. So here are some players you must-have in your RR vs RCB IPL 2022 Dream11 Team. RR vs RCB Dream11 Team Prediction IPL 2022: Tips To Pick Best Fantasy Playing XI for Rajasthan Royals vs Royal Challengers Bangalore Indian Premier League Season 15 Eliminator.

Chahal had been phenomenal in IPL 2022 and it didn't seem that right-arm leg spinner was playing for the newly joined team; Rajasthan Royals given the compatibility he seems to share with the franchise. He is the leading wicket taker in IPL 2022 currently with 26 wickets in 15 matches so far and holder of purple cap, if that isn't enough to include him among the players to watch out for than what could be, in the next big event of the season, the Qualifier 2.

He became the sixth batter in an IPL history to score over 700 runs in a single edition during Rajasthan Royals' previous match of play-off against Gujarat Titans (GT). Currently, Jos Buttler is the orange cap holder with the highest number of runs (718), which includes three centuries and four half-centuries in IPL 2022. He is the special card in a deck for RR and will be among the top players to watch out for in a game as crucial as Qualifier 2 of IPL 2022.

The Rajasthan Royals skipper took social media by storm after his blistering cameo of 47 runs from 26 balls in the Qualifier 1 against Gujarat Titans. Sanju Samson has been gracefully leading his side into the knockouts with multi individual contributions at crucial moments. The Wicket-keeper batter is a top pick in the decisive encounter between RR and RCB on Friday. RR vs RCB Preview: Likely Playing XIs, Key Battles, Head to Head and Other Things You Need To Know About TATA IPL 2022 Qualifier 2.

He became the first uncapped player in the history of IPL to smash a multi-record breaking century in play-offs after his stunning performance against Lucknow Super Giants (LSG) in an eliminator match of IPL 2022 and also the joint-fastest century in IPL knockouts in just 49 balls. Rajat Patidar's 112 off 49 was a surprise cameo that nobody saw coming against LSG. He will be definitely in the eyes of RR bowlers in the much-anticipated nerve-wracking Qualifier 2 between RR and RCB on Friday and surely among the players to watch out for.

Alot has been said in commendation for Harshal Patel by the former players in the wake of his tremendous execution of bowling skills and contribution to the team in IPL 2022. Harshal Patel has taken 19 wickets in 14 matches of IPL 2022, at an economy of 8.14 and bowled decently in the high scorer Eliminator match against LSG by conceding just 25 runs and taking a wicket. He is among the top players to watch out for from RCB side in the big game on Friday.

(The above story first appeared on LatestLY on May 27, 2022 12:42 PM IST. For more news and updates on politics, world, sports, entertainment and lifestyle, log on to our website latestly.com).