Sunrisers Hyderabad take on Kolkata Knight Riders in the Indian Premier League 2022. Meanwhile, for SRH vs KKR live streaming online and TV telecast details you can scroll down. 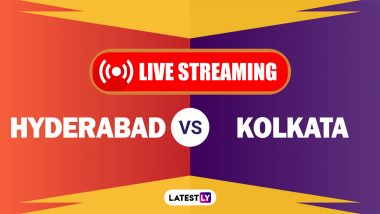 Sunrisers Hyderabad are slowly looking to get back on track in the Indian Premier League after a poor start to the campaign. With wins in their last two matches, Kane Williamson’s men have climbed to eighth in the points table, and they will be eager to head further north when they take on Kolkata Knight Riders. SRH had a poor showing last season, and the team management is under pressure to avoid a repeat of the mistakes. For Kolkata Knight Riders, their winning run came to an end when they lost out to Delhi Capitals. The game was one-sided, to say the least, but the team would consider it a minor blip in a long journey. SRH vs KKR Preview: Likely Playing XIs, Key Battles, Head to Head and Other Things You Need To Know About TATA IPL 2022 Match 25.

Sunrisers Hyderabad would have been buoyed by the way they beat Gujrat Titans in the last game considering the latter is on top of the points table. Bhuvneshwar Kumar and T Natarajan have been consistent with their IPL performances and the duo will have a huge role to play against KKR. In batting, Abhishek Sharma once again played a pivotal role in a run chase and the opener along with skipper Kane Williamson bring a sense of calmness on the pitch.

For Kolkata, the poor performance of Ajinkya Rahane and Venkatesh Iyer is a cause of concern for the team management. There could be change in combination for the game against Hyderabad. Andre Russell has been quiet with the bat but a swashbuckling innings is never far away from the Caribbean player. SRH vs KKR, Dream11 Team Prediction IPL 2022: Tips To Pick Best Fantasy Playing XI for Sunrisers Hyderabad vs Kolkata Knight Riders Indian Premier League Season 15 Match 25.

Those unable to watch the SRH vs KKR match live on television can follow the game online. Disney+ Hotstar will be live streaming the Sunrisers Hyderabad vs Kolkata Knight Riders match online for its fans in India. Fans, however, need to subscribe to Hotstar by paying a nominal subscription fee. Momentum is a key in the Indian Premier League and this certainly puts Sunrisers Hyderabad in a position of advantage. An important two points awaits the team against KKR.

(The above story first appeared on LatestLY on Apr 15, 2022 11:37 AM IST. For more news and updates on politics, world, sports, entertainment and lifestyle, log on to our website latestly.com).