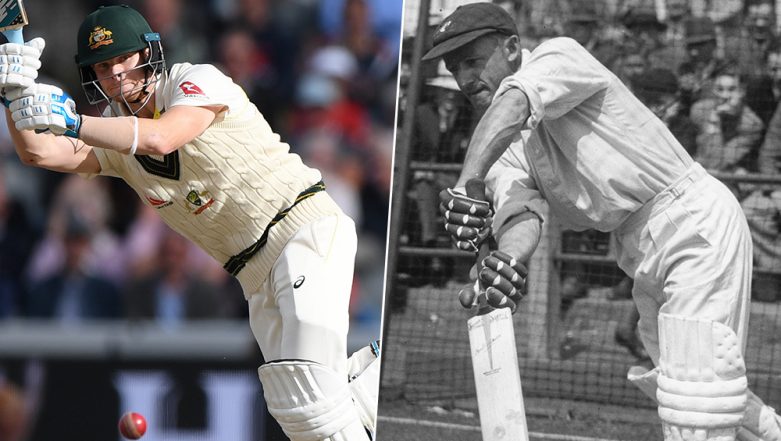 Steve Smith has successfully shown his dominant strength in batting after returning to Test cricket following a one-year ball-tampering ban. The Australian batsman has already broken multiple records in the ongoing Ashes 2019 series and is set to break an 89-year-old record of late cricket great Don Bradman. Smith has smashed 671 runs in 5 innings during Ashes 2019, hitting three hundred and two fifties. If Smith scores 304 runs in the fifth Ashes 2019 Test against England, he will surpass former Australian cricketer Sir Don Bradman’s record of most runs in a single Ashes tournament and a Test series. Steve Smith Batting Stats in Ashes 2019: Modern-Day Bradman Makes and Breaks a Flurry of Records in Fourth Test at Old Trafford Stadium.

Bradman had smashed 974 runs in 1930 Ashes series, which is the most runs scored in a single Ashes series as well as in a Test series. Smith, who hit a double century (211) and half-century (82) in Ashes 2019 England vs Australia 4th Test, can break this 89-year-old record of former Australian batting legend. Although 304 runs are quite a big margin, 30-year-old Smith can achieve this tally in the 5th Test considering his present form. In the 4th Test at Old Trafford, the former Australia skipper scored 293 individual runs in both the innings combined. Hence, Smith has the ability to reach the 304 plus runs in the 5th Test at Oval and leapfrog Sir Don Bradman in the record.  ‘Still a Cheat’! Steve Smith Reminded of His Past after Australian Batsman Ridicules Jack Leach During Fourth Test Victory Celebration in Ashes 2019.

Meanwhile, Australia retained the Ashes after bagging victory in the 4th Test by 185 runs. Australia won the first Test match too and lead the series 2-1. England won the 3rd Test while the 2nd match ended in a draw. The 5th and the last Test of Ashes 2019 starts on Thursday, September 12 at Kennington Oval in London.