Former England skipper Michael Vaughan feels former India captain Virat Kohli is not in the same league as Joe Root when it comes to "balancing the bat". 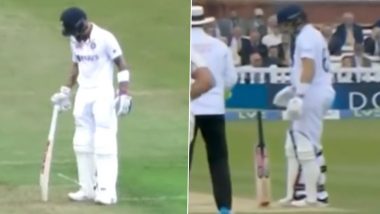 London, June 24: Former England skipper Michael Vaughan feels former India captain Virat Kohli is not in the same league as Joe Root when it comes to "balancing the bat". A video of Kohli trying in vain to make his bat stand upright without support while batting in the warm-up game against Leicestershire at the Grace Road ground in Leicester has gone viral. A fortnight ago, England's charismatic batter and former captain Root was being hailed as a "magician" after a video clip on social media, in which his bat was standing upright during the opening Test against New Zealand at Lord's, had gone viral. Virat Kohli Attempts To Recreate Joe Root’s Bat-Balancing Magic Act During India vs Leicestershire Practice Game (Watch Video).

Former England footballer and current sports broadcaster Gary Linekar, and noted journalist-writer Piers Morgan were left wondering how a bat could stand upright unaided, with the former indicating that Root could conjure up magic while at the crease. Root scored an unbeaten century when the chips were down as England went on to defeat World Test champions New Zealand by five wickets to take a 1-0 lead in the three-match series.

On one occasion during the match, TV footage showed Root's bat standing upright for several seconds on its own. Soon the clip went viral, leaving cricket fans baffled. After the clip was shared on Twitter by the BBC's Test Match Special account with the caption "Anyone know how he (Root) did this?!", Lineker, the BBC Match of the Day presenter, replied, "He's a magician". TV personality Piers Morgan had tweeted, "Yes. He's a magician with the bat. @root66." Virat Kohli Dismissal Video: Star Batter Left Surprised After Being Given Out Controversially During India vs Leicestershire Practice Match.

However, later it was revealed that Root's bat simply had a flat base instead of being slightly curved, allowing the prolific run-getter to leave it standing up on its own. On Thursday, the opening day of the four-day warm-up game against Leicester, Kohli kept trying something similar to Root but failed, prompting Vaughan to tweet, "Virat not in the same Bat balancing league as Joe."

Indian fans were not amused with Vaughan's comments and trolled the former England captain, saying it was none of his business to make such comments against a top Indian batter, while another wrote, "Sure enough Virat's bat swings & scores rather than standing up on the wicket." Kohli scored 33 off 69 balls in the Indians' first innings score of 246/8 declared in 60.2 overs. In reply, the hosts have managed 22/2 so far on Day 2 on Friday.

(The above story first appeared on LatestLY on Jun 24, 2022 04:45 PM IST. For more news and updates on politics, world, sports, entertainment and lifestyle, log on to our website latestly.com).