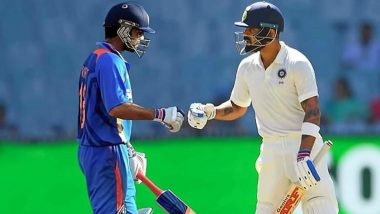 Indian captain Virat Kohli recently shared his 1000th post on Instagram and thanked his fans showing love and support throughout the journey. With 69.4 million followers, the top-ranked ODI batsman is the most followed Indian and fourth most followed athlete on the picture-sharing website. Kohli, who is widely regarded as one of the greatest batsmen ever, is an active user of social media and is constantly updating his fans by sharing photos and videos from his daily-life activities. Speaking of his 100th Instagram post, the right-handed batsman shared a photoshopped image in which the young Kohli can be seen fist-bumping the current one. Virat Kohli Shares Picture of Himself Enjoying Sunrise Sitting on Balcony.

“2008 2020. With many learnings along the way, I'm grateful for your love and support you guys have shown me. Here's to the #1000thPost,” the talismanic batsman captioned the picture. The rise of Virat Kohli over the years is nothing but sensational and his terrific performances on the field earned him a lot of fans. The RCB skipper has been inspiring his fans to be fit with his workout videos while his moments with wife Anushka Sharma are simply adorable. Meanwhile, have a look at Kohli’s 1000th post on Instagram. Virat Kohli First Indian to Reach 50 Million Followers on Instagram.

Speaking of cricket action, IPL 2020 is most likely to place later this year as the ICC T20 World Cup has been postponed officially. However, IPL governing council chairman Brijesh Patel has announced that the tournament will take place in UAE amid COVID-19 crisis. As per the tentative schedule, the marquee tournament will be played from September 26 to November 7.

However, fans might see Kohli take the field even before the IPL as some stakeholders in BCCI want the Indian team to play a T20I series against South Africa ahead of the tournament.

(The above story first appeared on LatestLY on Jul 23, 2020 11:44 AM IST. For more news and updates on politics, world, sports, entertainment and lifestyle, log on to our website latestly.com).