‘Was Having Sandwich When MS Dhoni Said Pad-Up’: Suresh Raina Recalls His Promotion in Batting Order Against Pakistan in 2015 World Cup 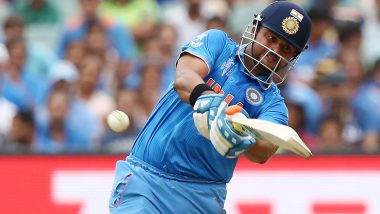 Suresh Raina might be out of favour from the national team at the moment. However, back in MS Dhoni's captaincy tenure, the southpaw was a vital cog of India's limited-overs side. Recently, the left-handed batsman recalled his surprised promotion against Pakistan in the 2015 World Cup. Ajinkya Rahane was the designated number four for India in the gala tournament. However, after the departure of Shikhar Dhawan in the 30th over of first innings, Raina came out to bat. Suresh Raina Believes Rohit Sharma’s Calmness and Ability to Motivate Players Makes Him Very Similar to MS Dhoni.

The 33-year-old batsman revealed that he was relaxed and was eating a sandwich when India's then skipper MS Dhoni came to him and asked him to pad up. “I never questioned his decisions. I remember I was having a sandwich or something during our match against Pakistan in World Cup 2015. Suddenly after 20 overs, he said ‘pad-up’. I padded up,’ said Raina in a YouTube video. Suresh Raina, Irfan Pathan Want BCCI to Allow Indian Players to Participate in Foreign T20 Leagues.

The decision proved to be spot on as Raina joint forces with the well-set Virat Kohli and the two batsmen took the Pakistani bowling line-up by storm. Kohli stole the show by scoring a brilliant century. While the southpaw played a fiery knock of 74 runs off 56 deliveries. “Virat was batting really well and this happened just a few overs before Shikhar (Dhawan) got run out. So I got out in the middle, played a few shots and scored 70-80 runs,” added Raina.

The Men in Blue posted a commendable total of 300 runs in the first innings. In reply, Misbah-ul-Haq and Co were bundled out for mere 224 runs and eventually lost the game by 76 runs.

Raina also revealed that he asked MS Dhoni about his promotion after the game. “After the match, I asked him why did you send me up the order? He said, ‘I thought you will play better against the leg-spinner who was bowling at that time’. He also praised me for my batting. So I also want to know what goes on in his mind,” Raina concluded.

(The above story first appeared on LatestLY on May 23, 2020 09:30 PM IST. For more news and updates on politics, world, sports, entertainment and lifestyle, log on to our website latestly.com).