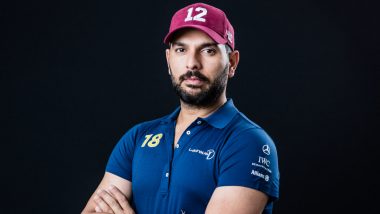 New Delhi, July 26: Former India all-rounder Yuvraj Singh feels he was handled very unprofessionally towards the end of his career. Yuvraj, who is regarded as one of the finest all-rounders ever to play the game, pulled down curtains over his trophy-laden career in June last year. Citing examples of few previous greats, who had similar illustrious careers on the international stage but didn't walk into the sunset on a high, Yuvraj said such cricketers, including himself, weren't given enough respect at the end of their respective journeys.

"I just felt that the way they managed me towards the end of my career was very unprofessional. But looking back at a couple of great players like Harbhajan (Singh), (Virender) Sehwag, Zaheer Khan, also very badly mis-managed. So it is part of Indian cricket, I had seen it in the past and I was not really surprised," Yuvraj said on Sportskeeda's Free Hit show. Yuvraj Singh, Shubman Gill Sweat Out in Gym Together As ‘Thugs of Punjab’ Get Ready for the Season (Watch Video).

"But in the future, anybody who has played for India for a long time and has been through tough situations, you should definitely honour him. "Give him that respect, somebody like Gautam Gambhir, who has won two World Cups for us. Sehwag, who has been the biggest match-winner after Sunil Gavaskar in Tests. VVS (Laxman), Zaheer (Khan), also," he added.

Yuvraj was an integral member of the team in India's two biggest wins at ICC events this century - World T20 2007 and World Cup 2011. Despite such impressive feats, Yuvraj doesn't feel he is a legend of the game.

"I don't think I'm a legend. I've played the game with integrity but I didn't play much Test cricket. Legendary players are those who have good Test records," Yuvraj said.

(The above story first appeared on LatestLY on Jul 26, 2020 08:07 PM IST. For more news and updates on politics, world, sports, entertainment and lifestyle, log on to our website latestly.com).