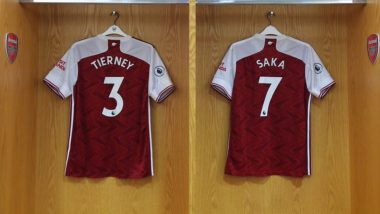 London, July 23: English Premier League side Arsenal on Thursday launched their new home shirt for the 2020-21 season, which retains the traditional red and white colors with a new triangular marble pattern Arsenal.

Arsenal will play the FA Cup final against Chelsea at Wembley Stadium on August 1. It will be the Gunners' only chance to secure the ticket to Europa League, as they are confirmed to finish outside the league's top six after their loss to Aston Villa.

The new home kit from adidas x The Arsenal

Meanwhile, Spanish club Villarreal on Thursday announced Unai Emery as manager for the next three seasons. Emery was sacked as Arsenal's coach in November 2019 after 18 months at the helm.

In his last role as manager, Emery took charge at Arsenal, with whom he was a UEFA Europa League runner-up in the 2018/19 campaign.

In the Premier League, Liverpool added cherry on top of their trophy presentation party with a 5-3 win over Chelsea at Anfield on Wednesday night.

(The above story first appeared on LatestLY on Jul 23, 2020 09:26 PM IST. For more news and updates on politics, world, sports, entertainment and lifestyle, log on to our website latestly.com).