Kerala Blasters and Chennaiyin FC have faced each other in 14 games and the latter lead the H2H records with six wins. Kerala Blasters have won just three matches while five others have ended in draws. Matches between these two teams have always been high-scoring affairs and at least three goals have been scored in their last three meetings. 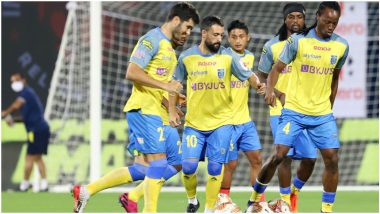 Chennaiyin FC will eye a third straight win over Kerala Blasters when they play the latter in their second match of ISL 2020-21. Chennaiyin FC vs Kerala Blasters match will be played at the GMC Stadium in Bambolim on November 29 (Sunday). Chennaiyin started their season with a 2-1 win over Jamshedpur while Kerala blasters are yet to win one after playing two matches. They were beaten 0-1 by ATK Mohun Bagan in their first match and were held to a 2-2 draw by NorthEast United in their second game. Ahead of the CFC vs KBFC match, we take a look at the head-to-head (H2H) records between these two teams in ISL history. CFC vs KBFC Dream11 Team Prediction in ISL 2020–21: Tips to Pick Goalkeeper, Defenders, Midfielders and Forwards for Chennaiyin FC vs Kerala Blasters FC in Indian Super League 7 Football Match.

Bartholomew Ogbeche scored a hat-trick in this match but Kerala lost 3-6. Rafael Crivellaro opened the scoring for Chennaiyin in the 39th minute. Nerijus Valskis made it 2-0 six minutes later before Crivellaro added another in added-time as Chennaiyin FC went into the break 3-0. Bartholomew Ogbeche pulled one back three minutes after the restart but Lallianzuala Chhangte restored the 3 goals lead. Ogbeche scored two more and made it 4-3 while also completing his hat-trick but Chhangte and Valskis added two more goals to complete the rout.

Andre Schembri opened the scoring as early as the fourth minute for the home side but Bartholomew levelled the scores 10 minutes later. Lallianzuala Chhangte then made it 2-1 in the 30th minute and Nerijus Valskis scored the third 10 minutes later. Eli Sabia received marching orders towards the ending stage of the match but Chennaiyin won comfortably.

Kerala Blasters thrashed Chennaiyin FC 3-0 with Matej Poplatnik scoring a wonderful brace while Sahal Abdul Samad scored the other goal. Poplatnik scored his first goal in the 23rd minute and then made it 2-0 in the 55th minute before Samad added the third 16 minutes later.

Both sides played a dull boring goalless draw with neither side failing to break the deadlock despite making a combined 26 attempted shots. Chennaiyin FC only managed to hit three on target and Kerala Blasters two as both sides were happy to take a point each.

(The above story first appeared on LatestLY on Nov 29, 2020 05:38 PM IST. For more news and updates on politics, world, sports, entertainment and lifestyle, log on to our website latestly.com).