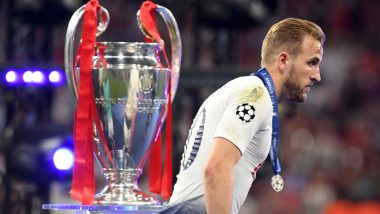 Germany and Portugal could host the remaining rounds of the 2019-20 UEFA Champions League matches, including the final, said reports. The final of the UCL was supposed to be held in Istanbul on May 30, 2020, but was postponed indefinitely but UEFA due to the coronavirus pandemic. The organization also appointed a group to decide the calendar for the remainder of the season. The UEFA executive committee is also set to meet on June 17 to decide the host venue for the Champions League final, which will also stage the quarter-final and the semi-finals. Liverpool vs Atletico Madrid 2019–20 Champions League Anfield Match Linked to ‘41 Additional’ Coronavirus Deaths in UK: Report.

The Associated Press reported a source as saying that that ‘the priority for the remaining Champions League matches is choosing a location accessible to players and officials as fans are unlikely to be allowed in due to COVID-19 restrictions.’ Portugal are said to be the front-runners for hosting the 2019-20 Champions League final and Portugal football association president Marcelo Rebelo de Sousa added to the speculations by saying that there was some potential ‘good news’ for football fans. Liverpool Shares Videos of Fans Celebrating UEFA Champions League 2018-19 Win, Says ‘Remember to Stay Safe’.

The UEFA Champions League final is usually staged at a neutral venue and Istanbul’s Atatürk Olympic Stadium was the venue for this year’s final but with Turkey severely affected by the COVID-19 pandemic, the UEFA decided the shift the host country. It also plans to host the semi-finals in neutral venues.

Football came to a halt in March with most teams yet to play the second leg of the Champions League round of 16. Paris Saint-Germain, Atalanta, Atletico Madrid, RB Leipzig were the only teams to complete both the legs of the last 16 and progress to the quarter-finals.

(The above story first appeared on LatestLY on Jun 04, 2020 04:16 PM IST. For more news and updates on politics, world, sports, entertainment and lifestyle, log on to our website latestly.com).