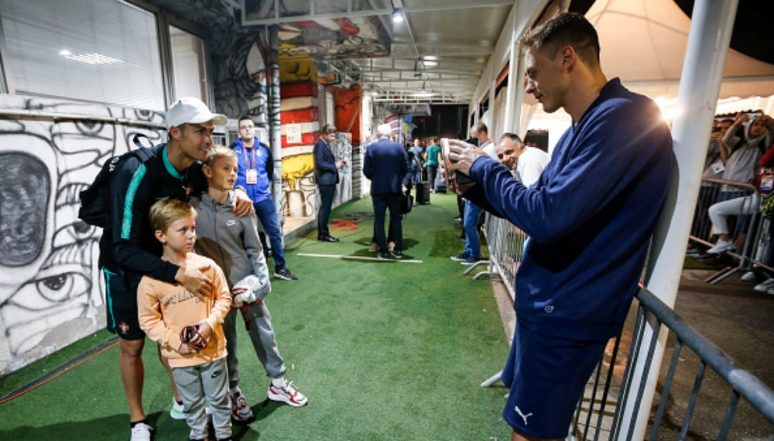 Nemanja Matic (R) of Serbia take a photo of his sons with Cristiano Ronaldo (L) of Portugal during the UEFA Euro 2020 (Photo Credits: Getty)

Cristiano Ronaldo has always been amazing with kids. On many occasions, the footballer has gone out of his way to meet his young fans and has clicked selfies and signed autographs for them. Now, the Juventus football star was seen clicking pictures with the kids of the Serbian footballer Nemanja Matic’s after Portugal beat Serbia 4-2 at the Red Star Stadium. Serbian footballer’s son is an ardent fan of Ronaldo and after the final whistle was blown, the two along with their father went to meet CR7. Cristiano Ronaldo Silences Serbian Crowd With a Goal After they Chant ‘Messi Messi’ During Serbia vs Portugal, Euro 2020 Qualifier (Watch Video).

Nemanja Matic patiently waited with his son and his friend outside CR7’s changing room. No sooner CR7 saw Matic, he hugged the Serbian and gave a high five to both the kids. He also clicked a picture with the boys and the two were obviously left smiling ear-to-ear. The video of the kids meeting the football star was shared on social media. Check it out below:

Matic’s son also posed for a picture with CR7’s jersey.

Talking about the game, Cristiano Ronaldo scored a goal at the 80th minute after the Serbian crowd took a jibe at him chanting Lionel Messi’s name from the stand. With this win, Portugal now stands on number two with five points in their kitty. Placed in Group B, the team has played three matches and has won only one game whereas have faced a couple of draws. Ukraine stands on number one with 13 points. The team will next face Lithuania on September 11, 2019, at the LFF Stadium.