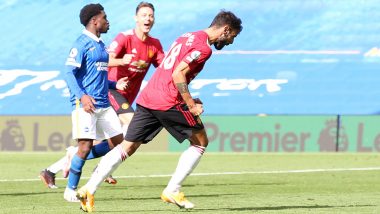 Manchester United recorded their first win of the Premier League 2020-21 season as they defeated Brighton on Saturday in a controversial manner. Bruno Fernandes bailed the Red Devils out as he scored the winning penalty in the 100th minute of the game after referee Chris Kavanaugh decided that Neil Maupay had handled the ball inside the box after consultation with VAR and pitch-side monitor. Jadon Sancho Transfer News Latest Update: Manchester United to Make One Final Bid to Borussia Dortmund for England Star.

Manchester United, who were defeated in the opening game of the season by Crystal Palace, came into the game with high hopes as the have a great record against the Seagulls in recent history. However, the Red Devils were put on the back near the end of the opening half as Neil Maupay opened the scoring from the spot.

However, Ole Gunnar Solskjaer’s men hit back a couple of minutes later as Lewis Dunk’s own goal meant Manchester United finished the first half on level terms. Brighton continued to dominate the second half but were pegged back as Marcus Rashford scored a brilliant solo goal to put his side in the lead for the first time on the day.

Graham Potter’s men continued to dominate the games despite going a goal behind. Their handwork was rewarded in added time as Sully March scored with a header in a practically empty net. However, there was a late twist after the referee adjudged Neil Maupay to have handled the ball off a Harry Maguire header from a very close distance. Bruno Fernandes converted the penalty to give United all there points.

This result left football fans frustrated as they blamed Video Assistant Referee (VAR) for favouring with Manchester United. Earlier in the second half, Brighton were awarded a penalty for Paul Pogba’s push on Aaron Connolly but Chris Kavanaugh decided to change his decision after consulting with VAR. Here are some of the reactions.

I thought football has rules...the so called Laws Of The Game.

Why don't they apply to Manchester United???

With VAR. Without VAR pic.twitter.com/xoRBoAxIUl

Tree things we learn from this match

1. Manchester United can not win without penalty

2. England VAR are always in favour of Manchester United

3. Manchester United Deserve to go-to market for another Strikers and Defenders.#BHAMUN pic.twitter.com/I8opgxbWRx

So Manchester United get a decision after the full-time whistle yet they couldn’t get this one correct. The officiating in this country is at an all-time low pic.twitter.com/Y8RPNwd0fQ

Manchester United became the only team that continued a match after a final whistle.. History 😂

Imagine if God treated you life like referees treat @ManUtd.

Even after your death, you get to come back to finish projects and defeat your enemies.

This was Manchester United first win of the season which saw Ole Gunnar Solskjaer’s team move to 13th spot in the team standings. The Red Devils face Brighton again during midweek in EFL cup 2020-21 clash before taking o Jose Mourinho’s Tottenham Hotspur next week at the Old Trafford Stadium.

(The above story first appeared on LatestLY on Sep 26, 2020 07:47 PM IST. For more news and updates on politics, world, sports, entertainment and lifestyle, log on to our website latestly.com).