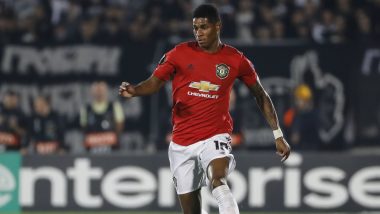 Manchester United recorded their first win in the Premier League 2020-21 season as they defeated Brighton 3-2 at the Ammex Stadium on Saturday. Bruno Fernandes scored a penalty in the 100th minute of the game to give Ole Gunnar Solskajer’s men all three points from the game. The late and controversial spot-kick got all the headlines which took the limelight away from a brilliant Marcus Rashford solo goal. EPL 2020-21: Bruno Fernandes' 100th Minute Penalty Helps Manchester United Beat Brighton, Fans Slam VAR For Favouring Red Devils.

The England international played a crucial role in Manchester United’s win over Brighton. The Red Devils were pegged back in the opening half courtesy of a Neil Maupay penalty but got themselves back on level terms as Lewis Dunk scored past his own goal-keeper. The Seagulls were denied a penalty early in the second half and moments later Marcus Rashford gave his team a lead for the first time in the game.

With this goal, Marcus Rashford opened his account in the Premier League this season. The England international got on the end of a Bruno Fernandes pass and dribbled past three Brighton players in sensational style before slotting the ball past Matt Ryan in the Brighton goal.

What a goal by Marcus Rashford #BHAMUN

Brighton got themselves back on level terms in the final moments of the match as Sully March netted in the fifth minute of the extra time. However, this wasn’t the final action of the game as Bruno Fernandes scored a penalty in the 100th minute after referee Chris Kavanaugh offered a controversial penalty.

With this win, Manchester United moved to 13th in the points table. The Red Devils take face Brighton midweek in EF Cup clash and following that will take on Jose Mourinho's Tottenham Hotspur in the Premier League during the weekend.

(The above story first appeared on LatestLY on Sep 26, 2020 10:23 PM IST. For more news and updates on politics, world, sports, entertainment and lifestyle, log on to our website latestly.com).