England were awarded a controversial penalty in the 104th minute after Raheem Sterling fell following a challenge from Joakim Maehle. Kasper Schmeichel saved the penalty but Harry Kane scored the rebound to put England on top. 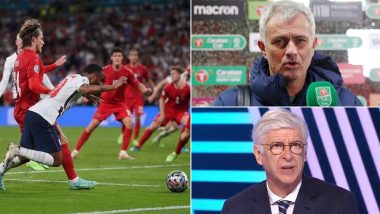 England registered a dramatic win over Denmark in the second Euro 2020 semi-final on Thursday. Although it was a historic moment for England in front of their home crowd, the result wasn't without its controversy. The score was tied 1-1 at the end of full time after a well-contested battle. In the 104th minute, Raheem Sterling appeared to lose his balance and fall down due to a challenge from Joakim Maehle. The referee pointed to the spot and despite a review, the decision wasn't changed. England 2-1 Denmark, Euro 2020: Harry Kane Sends Three Lions To First Major Final in 55 Years (Watch Goal Video Highlights)

Harry Kane took the penalty and it was saved by Denmark custodian Kasper Schmeichel, but the Spurs striker slotted the ball home in the rebound and put England ahead. Speaking to TalkSport, new AS Roma manager disagreed to believe that it was a penalty. "It was NEVER a penalty! Especially at this level, the semi-final of a Euro. I don’t understand the decision.”

Mourinho was joined by former Arsenal coach and old rival Arsene Wenger, who too agreed that it wasn't a penalty. "No penalty, I don't understand why VAR didn't ask the referee to look at it!" said Wenger on a post-match show."

Denmark had staged a dramatic fightback in Euro 2020. They lost one of their key players in Christian Eriksen in the first match with a cardiac arrest and had a terrible performance in the first two matches. But they have turned up big time, making their way to the semi-final, much to the surprise of football fans. Their coach, Kasper Hjulmand, who expressed his disappointment at the decision. “It was a penalty that shouldn't have been a penalty and it's something that annoys me right now," he said.

(The above story first appeared on LatestLY on Jul 08, 2021 01:24 PM IST. For more news and updates on politics, world, sports, entertainment and lifestyle, log on to our website latestly.com).