Brazil, Switzerland, Cameroon and Serbia make Group G in this competition. Although Brazil are favourites to top the standings at the end of the group stage matches, the other teams cannot be underestimated at all. 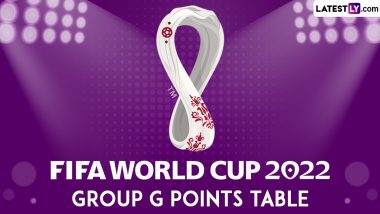 Switzerland joined Brazil in the round of 16 from Group G with a thrilling victory over Serbia in the FIFA World Cup 2022 on Saturday, December 2. Cameroon, despite beating Brazil in their last group stage match, failed to advance owing to two fewer points than second-placed Switzerland. Serbia on the other hand remained winless and did not progress to the next stage. The 22nd edition of the global football championship will witness 32 qualified nations competing for one common goal to win World Cup glory on 18 December. The tournament will last for a span of 29 days with 64 scheduled matches to be played in two rounds; Group Stage and Knockouts. The tournament will kick-start with group-stage matches. 32 teams have been segregated into eight groups, with four teams in each. Group G includes the numero Uno in the football World Cup history, Brazil alongside Serbia, Switzerland and Cameroon.  FIFA World Cup 2022 Schedule for Free PDF Download Online: Get Football Fixtures, Time Table With Match Timings in IST and Venue Details

The first match of Group G was played between Switzerland and Cameroon on 24 November at Al Janoub Stadium where the Swiss men emerged winners. Meanwhile, the last match of Group G in the league stage is slated on 3 December. The winning team in each group stage match will be rewarded with three points on the table. If a match ends in a tie, each team will get one point apiece. Once the league matches are over, the winner and runner-up of the group will advance to the round of 16 of the tournament.

On record, Brazil is the most successful world cup team with five titles. Interestingly, Brazil, Switzerland and Serbia have been the group mates in the 2018 edition of the FIFA World Cup as well. Brazil were the top-ranked side from the group in that edition, whereas Switzerland finished in the second position. Third-placed Serbia was eliminated from the tournament in the group stage. Cameroon, who failed to qualify in the last season, are set to make their eighth appearance in FIFA World Cup in Qatar.

(The above story first appeared on LatestLY on Nov 27, 2022 10:42 PM IST. For more news and updates on politics, world, sports, entertainment and lifestyle, log on to our website latestly.com).