Barcelona will look to complete a double over Dynamo Kyiv in the UEFA Champions League 2020-21 Group Stages and secure their berth in the UCL round of 16. Ronald Koeman's side are on top of Group G. The UCL also comes at nice time for Koeman especially after yet another disappointing defeat in La Liga. 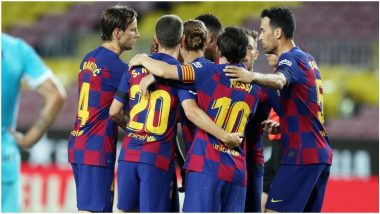 Ronald Koeman is struggling as a Barcelona manager with the Catalonians languishing at 13th in the Spanish La Liga. Injuries and lack of form of key players have contributed to this period of sustained failure at Barcelona and this is where Koeman has to step in and try to reverse the situation. An away trip against Dynamo Kyiv tonight in the Champions League is a must-win for the club despite them being comfortably placed for qualification. The win will give the manager some relief with fans growing frustrated. Opponents Dynamo Kyiv have managed just one point in three games and do not look like progressing further. Meanwhile, fans searching for how and where to watch the Dynamo Kyiv vs Barcelona UCL Group G match should scroll down for details. Lionel Messi, Frenkie De Jong Left-Out of Barcelona’s Squad for UEFA Champions League 2020–21 Match Against Dynamo Kyiv.

Nine players of the Dynamo Kyiv team are in quarantine and will not feature against Barcelona tonight. Forward Artem Besedin is serving a doping ban and he misses out as well. Vladyslav Supriaha, the 20-year-old striker for Kyiv, played well in the reverse fixture in Nou Camp and should lead the attack again. Midfielder Denys Harmash has a lot of work to do in midfield, tracking Barcelona’s attacking players.

Barcelona have Ansu Fati and Gerard Pique out with long term injuries while Phillipe Coutinho is available once again for a spot in the starting eleven. Ronald Koeman has left out Lionel Messi and Frenkie de Jong from the travelling Barcelona squad with the Dutchman explaining the duo needed some rest. Antoine Griezmann will be the main man in Barcelona’s attack which also involves an in-form Ousmane Dembele. Miralem Pjanic will be looking to make good use of this opportunity with playing time hard to come by ever since making a move from Juventus.

Dynamo Kyiv vs Barcelona UEFA Champions League 2020-21 Group G match will be played on November 25, 2020 (Tuesday midnight). The Group G clash will be held at the Olympics Sports Centre in Kiev and the game is scheduled to begin at 01:30 am IST (Indian Standard Time).

Fans in India can live telecast the Dynamo Kyiv vs Barcelona Group G match on Sony Sports channels. Sony Pictures Sports Network (SPSN) is the official broadcaster for UEFA Champions League 2020-21 in India. So fans need to tune into Sony Ten and Sony Ten HD channels to watch the DYK vs BAR Group G match live on their television sets.

Fans unable to watch the game on television need not worry as there are always online options available. SonyLiv, the OTT of Sony Sports, will be live streaming the Group G match online for fans in India. Barcelona are miles ahead of Dynamo Kyiv in quality and should win this game comfortable despite not being in the best of forms.

(The above story first appeared on LatestLY on Nov 24, 2020 11:53 PM IST. For more news and updates on politics, world, sports, entertainment and lifestyle, log on to our website latestly.com).