India vs Oman, 2022 FIFA World Cup Qualifiers: Struggling India Visit Oman With Hopes of Getting Disorientated Campaign Back on Track 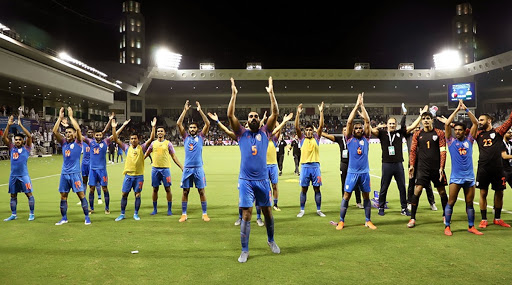 India will take on Oman in a do-or-die World Cup qualifier match on November 19, 2019 (Tuesday). The Blue Tigers are still winless this campaign with three draws and a loss. In the previous meeting between the sides, Oman registered an important win, courtesy of two late goals from Al Mandhar Al Alawi. India have come into this match knowing that anything other than victory may end their chances of qualifying for the 2020 World Cup in Qatar. Oman are having a good campaign and are currently in the second position on the table with ten points from their opening four games. This campaign is also a joint qualifying round for the 2023 Asian Cup and the third-placed and the fourth-best placed teams across the eight groups automatically get a spot in the third round of the qualifiers of the continental championship. India vs Oman, FIFA World Cup 2022 Qualifiers: Udanta Singh, Ahmed Mubarak & Other Key Players to Watch Out for in Oman vs India Football Match.

Oman are coming into this match with an emphatic 4-1 win over Bangladesh. India, on the other hand, are struggling after a spirited goalless draw against Qatar as they needed late equalisers against Bangladesh and Afghanistan to come away with an equal share of points. After three draws and a defeat, India are fourth in Group E while Oman sit comfortably in second with 10 points. Igor Stimac’s side have struggled in not only defence but also attack. They have failed to score a goal from open play in this qualifying campaign as all their three goals have come as a result of set-pieces by Brandon Fernandes. India will be without the services of Sandesh Jhingan, Rowlin Borges and Amarjit Singh who are out injured while Anas Edathodika will be unavailable due to family emergency.  FIFA World Cup Qualifiers 2022 Asia Group E Points Table Updated: Team Standings of India, Bangladesh, Qatar, Oman and Afghanistan.

Based on the recent run of results, Oman will be the favourites to come away with all three points. An upset win over Oman will certainly keep Igor Stimac’s side in the hunt for a next round berth while a loss will put them out of contention for the 2022 World Cup qualifications. Historically too, India are underdogs in this fixture as Oman are undefeated in the last seven encounters between the sides. India will be hoping for a win to get their qualification campaign back on track.