Dortmund, earlier this week, turned down a 91 Million Euros bid from Manchester United for the winger and are holding out on the 120m Euros fee demand. The Bundesliga club refused to lower their valuation despite repeated pitching from United. With the deal looking impossible, United have turned their eyes towards Ousmane Dembele of Barcelona. 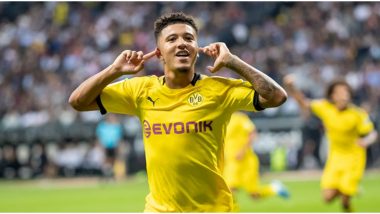 Manchester United will complete the signing of Jadon Sancho by the end of the transfer deadline day on October 5 (Monday), feels Jamie Redknapp. The Liverpool legend is confident that United will get their player before the summer transfer window draws to an end on Monday. Sancho has been United’s top priority throughout the summer but the club have failed to negotiate a deal with Borussia Dortmund, who have refused to sell the 20-year-old winger for anything below 120 million Pounds. Sancho has already agreed personal terms with United for a five-year contract and is eagerly waiting for both clubs to agree on a transfer fee. Edinson Cavani Transfer News Latest Update: Manchester United Set to Sign Ex-PSG Striker on Short-Term Deal.

Dortmund, earlier this week, turned down a 91 Million Euros bid from Manchester United for the winger and are holding out on the 120m Euros fee demand. The Bundesliga club refused to lower their valuation of the England international despite repeated pitching from United. With the deal looking impossible, United have turned their eyes towards Ousmane Dembele of Barcelona and are looking to get the player on loan for this season. Jadon Sancho Skips Training As Manchester United Move Edges Closer.

Redknapp, however, remains confident that the Red Devils will ultimately get their No 1 target before the transfer window shuts close on Monday. "It hasn't gone through yet but I think it will," the former midfielder was quoted as saying by Sky Sports. "You see certain transfers and it is ebbing that way. There's a lot of to-ing and fro-ing, and when Manchester United call, or any big club, there's always a premium on players.

“Dortmund want to get as much as they can for someone like Jadon Sancho. I get that. But I think he'll be a Manchester United player by the end of the window,” he added. Sancho signed for Dortmund in 2017 from Manchester City and is keen on a return to the Premier League.

United have so far failed to match Dortmund’s demand of 120 million Euros but have not ruled out the possibility of completing the deal before the transfer window closes. The Red Devils have been in constant touch Dortmund chiefs and are working closely towards reaching an agreement and completing the transfer.

Meanwhile, United are also set to sign former Paris Saint-Germain striker Edinson Cavani, who is a free agent after leaving PSG this June. Cavani is set to move to Old Trafford on a one-year deal with the club also having the option to extend it for another 12 months. The 33-year-old Uruguayan striker scored 200 goals in seven seasons with PSG and lifted six Ligue 1 titles with the club.

(The above story first appeared on LatestLY on Oct 04, 2020 11:53 AM IST. For more news and updates on politics, world, sports, entertainment and lifestyle, log on to our website latestly.com).