Juventus’ Away Kit for Serie A 2020-21 Leaked on Social Media Ahead of Champions League 2019-20, Fans Come up With Mixed Responses (Read Tweets) 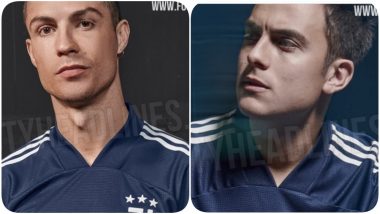 A few days ago, Juventus launched their home kit with a white shirt and black stripes. Now, the away kit of the Bianconeri has leaked on social media ahead of their Champions League 2019-20 game against Lyon. The kit will be made available for the upcoming season of the Serie A. Bathed in dark blue, the jersey has stripes on its sleeves and has a collar. The pictures with players posing in the jersey of Juventus has been doing rounds on social media. The fans have had mixed responses over the same. While one of them lashed out at the makers, the other went on to raise and objection about the collar. Wojciech Szczesny Fires Cristiano Ronaldo Warning to Lyon Ahead of Champion League 2019-20 Match, Says ‘He Is Ready to Perform Another Miracle’.

While a section of the netizens found the shirts impressive. Juventus is all set to play the home game in the Champions League 2019-20 against Lyon on August 8, 2020. The Old Lady welcomes Lyon as the opponents have an upper hand in the game. Lyon is 1-0 up in the aggregate score. Now let's have a look at the pictures of the new kits and then the reactions.

Wtf is that collar omg

I'm okay with the sleeves. Maybe because I used to wear shorts with stripes like these as a kid 😅😅

But the collar man. Not ideal for someone skinny like me 😣😣

Most of Addidas kits are worst now they should learn from nike and puma thier kits are always looks sexy and descent .

Ahead of the game, Wojciech Szczęsny issued a warning to the opponents and said that Cristiano Ronaldo is ready to perform another miracle. The team would be looking to turn the tides to get past the Round of 16. The match will begin at 12.30 am IST.

(The above story first appeared on LatestLY on Aug 06, 2020 02:18 PM IST. For more news and updates on politics, world, sports, entertainment and lifestyle, log on to our website latestly.com).