According to TeamTalk, Manchester United are interested in signing Pau Torres and hope that Eric Bailly might help in reducing the Spaniard's transfer fee. Villarreal currently value their star defender at around £60million but the EPL giants aren’t willing to pay the amount in full. Torres in recent years has cemented himself as an undisputed starter for Villarreal. 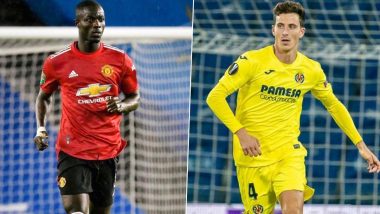 Manchester United are looking to offload defender Eric Bailly as the record Premier League champions believe that the Ivorian could play an important part in them acquiring the services of their desired target. The 26-year-old joined the Red Devils in 2016 for a fee of £30million from Villarreal but has been unable to cement his place in the team as injuries have played a huge role. Manchester United Transfer News Update: Dean Henderson Considering Loan Move to Celtic.

According to TeamTalk, Manchester United are interested in signing Pau Torres and hope that Eric Bailly might help in reducing the Spaniard's transfer fee. Villarreal currently value their star defender at around £60million but the Premier League giants aren’t willing to pay the amount in full and believe that including the 26-year-old defender in a potential deal could lower his price. Manchester United Transfer News Update: Jonny Evans Could Make Shock Return to Old Trafford Next Summer.

Pau Torres has been one of the best defenders in La Liga this season and also has been a regular feature in the Spain line-up. The young centre-back from Villarreal has established himself as a starter in Luis Enrique’s Spain team partnering Real Madrid skipper Sergio Ramos at the heart of their defence.

Manchester United have had their fair share of defensive problems in recent years as despite signing some promising and big-name players, they have failed to live up to the expectations. With doubts surrounding the quality of Victor Lindelof, Marcus Rojo and even Harry Maguire, the Red Devils believe that Pau Torres will be the ideal partner for the Englishman.

Pau Torres made his La Liga debut in 2017 and in recent years has cemented his place as an undisputed starter for Villarreal. The 23-year-old made 34 appearances in the league last season and, helping the Yellow Submarines to fifth place finfish and has played in 10 games for the Spanish side as they sit comfortably in third.

(The above story first appeared on LatestLY on Nov 29, 2020 08:05 PM IST. For more news and updates on politics, world, sports, entertainment and lifestyle, log on to our website latestly.com).