Bayern Munich are interested in signing Raheem Sterling in the upcoming transfer window. However, the Bavarians aren't the only side wanting his signature as Real Madrid and Chelsea also have the winger on their radars. 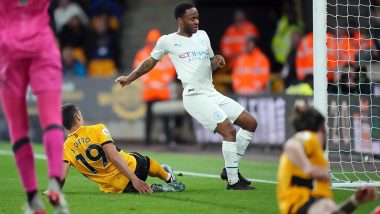 Raheem Sterling is set to enter the final year of his contract at Manchester City. With no reports of the Englishman being offered a new deal by the Premier League champions, several Europan giants are aiming to sign the winger, who is also open to moving, in the summer.  Raheem Sterling Targetted By Los Blancos After Kylian Mbappe Snub.

According to a report from The Sun, Bayern Munich are interested in signing Raheem Sterling in the upcoming transfer window. However, the Bavarians aren't the only side wanting his signature as Real Madrid and Chelsea also have the winger on their radars.

Raheem Sterling saw his game-time reduced considerably in the second half of the season. He started Manchester City's final league and the Champions League semi-finals on the bench. And with his diminishing role, the reigning English champions could be open to cash in on the winger if a correct bid arrives.

Bayern Munich are the latest team to express interest in the winger. The Bavarians are more likely to lose Robert Lewandowski in the summer and are looking at options to replace the prolific goal-scorer.

Meanwhile, Real Madrid after missing out on both Kylian Mbappe and Erling Haaland, are looking to strengthen their squad for the next season. Chelsea are also keeping tabs in the winger as they wim to bolster their inconsistent attacking unit.

There are still no reports of Raheem Sterling being offered a new deal by Manchester City. However, it is understood that they will begin negotiations with the winger since he returns from international duty later this month.

Manchester City have already signed young Argentine Julian Alvarez and Norwegian prodigy Erling Haaland in the summer. This could open the door for them to sell Raheem Sterling.

(The above story first appeared on LatestLY on Jun 01, 2022 04:58 PM IST. For more news and updates on politics, world, sports, entertainment and lifestyle, log on to our website latestly.com).