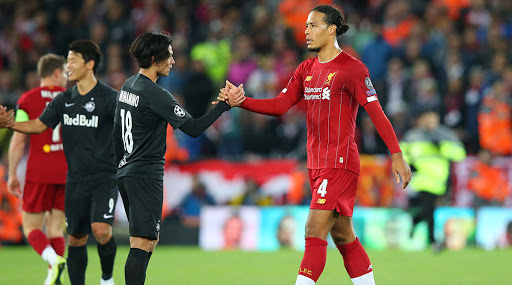 RB Salzburg (SAL) will host Liverpool (LIV) in a winner takes all clash in Group E of the UEFA Champions League 2019-20. SAL vs LIV match will be played at the Red Bull Arena, Salzburg on December 10, 2019 at 11:30 pm IST. Liverpool are at the top of their group while Salzburg are third but the Reds cannot afford a slip-up in this match as a loss can kick them out of the top spot and end their Champions League journey. For fans of Dream11 fantasy game, here are some tips and team suggestions so you can build a strong team for the RB Salzburg vs Liverpool clash in Champions League 2019-20. Sadio Mane Is The New Cristiano Ronaldo, Feels Dutch Legend Danny Blind.

RB Salzburg have been a surprise package this season as the Austrian side have punched above their weight and pulled off some spectacular results. In the previous meeting, Liverpool emerged victorious by an odd goal in seven thanks to a late Mohammad Salah strike. Norwegian forward Erling Haland has been a revelation this season as the striker has scored eight goals in his five Champions League appearances this season and is the leading scorer in the competition. He will be a main threat for the Merseyside club. Liverpool will be without Fabinho in their midfield as the Brazilian is out injured. Lionel Messi on Sadio Mane Finishing Fourth in Ballon d’Or 2019 List, ‘It’s a Shame’.

RB Salzburg vs Liverpool, ISL 2019, Dream11 Team Prediction: Goalkeeper – Alisson Becker (LIV) is been in great form and should be selected as your keeper.

RB Salzburg vs Liverpool, ISL 2019, Dream11 Team Prediction: Midfielders – Sadio Mane (LIV) has been in the form of his life and should be selected as your vice-captain. The other players in your team should be Mohamed Camara (SAL), Jordan Henderson (LIV) and Gini Wijnaldum (LIV).

RB Salzburg vs Liverpool, ISL 2019, Dream11 Team Prediction: Forwards – Erling Haland (SAL) is the competition’s top scorer and should be your captain. The remaining slots in your team should be filled by Hwang Chan (SAL) and Roberto Firmino (LIV).

RB Salzburg have the chance to pull off the biggest upset of the season by knocking out Liverpool from the Champions League. The Austrian side will take confidence from their performance during the previous meeting between the sides but have a gigantic task in front of them.