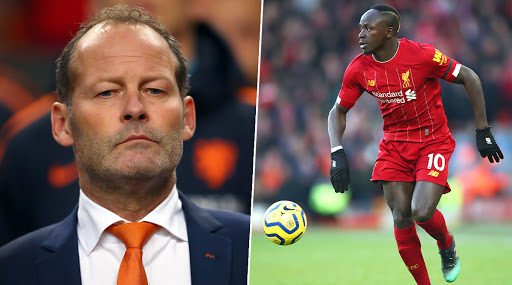 Dutch legend Danny Blind has hailed Liverpool number 10 Sadio Mane in a recent interview and also called the Senegalese forward as the new 'Cristiano Ronaldo.' Mane recently finished fourth in the Ballon d’Or rankings, which is one behind the player Blind compared him with. The Senegalese has been influential for Liverpool in recent times, and was instrumental in their journey of becoming European champions. Sadio is at the peak of his career and in his current form is certainly the best player for the Reds as the forward has nine goals and four assists in 15 premier league games so far. Cristiano Ronaldo Congratulates Lionel Messi, But Takes a Nasty Jibe at Virgil van Dijk For Cracking a Joke on Him During Ballon d’Or 2019 Award Ceremony.

Cristiano Ronaldo might be entering his twilight years but according to Danny Blind, Sadio Mane can be the new ‘Ronaldo’. 'Sadio Mane is the new Ronaldo in world football,' Danny Blind said, per The Sports Rush. Danny also brought light to the fact that Messi voted his as the best player in 2019. 'Do you know why Messi voted for Mane? Because great players recognise other great players. I don’t compare Mane to Messi. I think Sadio is much more like Cristiano Ronaldo in his very best years. Ronaldo was so physically and mentally strong.' He added. The Dutch legend is surely a fan of Mane as he compared the Senegalese forward to a rock of granite. 'Sadio is like a massive rock of granite and yet so dynamic at the same time – just like Ronaldo was for so many years. It is right that people are finally taking notice of Mane as an incredibly special player.' Lionel Messi on Sadio Mane Finishing Fourth in Ballon d’Or 2019 List, ‘It’s a Shame’.

Sadio Mane is surely in the form of his life and with the Leo Messi and Cristiano Ronaldo era coming to an end, he could be next in line for taking over the mantle as the best player in the world. Mane is expected to lif the Premier League trophy at the end of the season as the Reds are 14 points clear of Man City and eight points ahead of nearest challengers Leicester.