Tottenham Hotspur vs Manchester United, Premier League 2019–20: Harry Kane, Bruno Fernandes and Other Players to Watch Out for Ahead of EPL Match 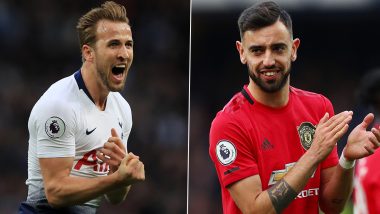 Spurs will restart their Premier League campaign on June 19 as they host Manchester United at the Tottenham Hotspur Stadium. Jose Mourinho will take on his former employers as both the teams seek qualification for next year’s Champions League. The north London club are eighth in team standings, seven points behind fourth-placed Chelsea while United are fifth and three points off the UCL spot. TOT vs MUN Dream11 Prediction in Premier League 2019–20.

After a positive start under Jose Mourinho, Spurs underwent a difficult period before the lockdown, failing to win in six consecutive matches. The north-London club have been knocked out of Champions League by Leipzig and have suffered back to back defeats in the league as well. This break will surely have given the time to regroup and rethink their strategy going forward. Tottenham Hotspur vs Manchester United, Premier League 2019-20 Free Live Streaming Online.

Meanwhile, Manchester United have recovered from one of the worst starts in their history and are now unbeaten in the last 11 games in all competitions. The record English champions have taken 11 points from the last available 15 in the league, which includes a 2-0 win over defending champions Manchester City.

Now ahead of this all-important clash, we take a look at some of the players who can have a huge impact in this game.

The striker’s return will be an added boost for Jose Mourinho’s men. Spurs lost their star man at the turn of the year but with the competition being suspended temporarily due to the pandemic, Kane has been able to recover to help his side in their champions league bid. He will play a crucial part of Spurs are to get the better of United.

Since the Portuguese midfielder’s arrival in January, Manchester United have been an entirely different side. Fernandes gave them the much-needed spark as well as being the crucial player which links their midfield and attack. Such has been his impact that the 25-year-old was voted as player of the month in his very first month in English football.

The South Korean was away at compulsory three-month military service for his country but is now back and will be able to take part in the remaining fixtures. The 27-year-old has been one of the biggest goal threats for Spurs this season, scoring 16 times in 32 games. He will pose a great threat for United defence in this game with his quick pace.

Marcus Rashford just like many others in this game returns from a lengthy injury. The 22-year-old Englishman has been one of the best players for United this season. In 31 appearances this season, Rashford has been involved in 26 goals, scoring 19 times. He will be eager to continue that form and take his side one step closer to UCL qualification.

(The above story first appeared on LatestLY on Jun 19, 2020 04:24 PM IST. For more news and updates on politics, world, sports, entertainment and lifestyle, log on to our website latestly.com).